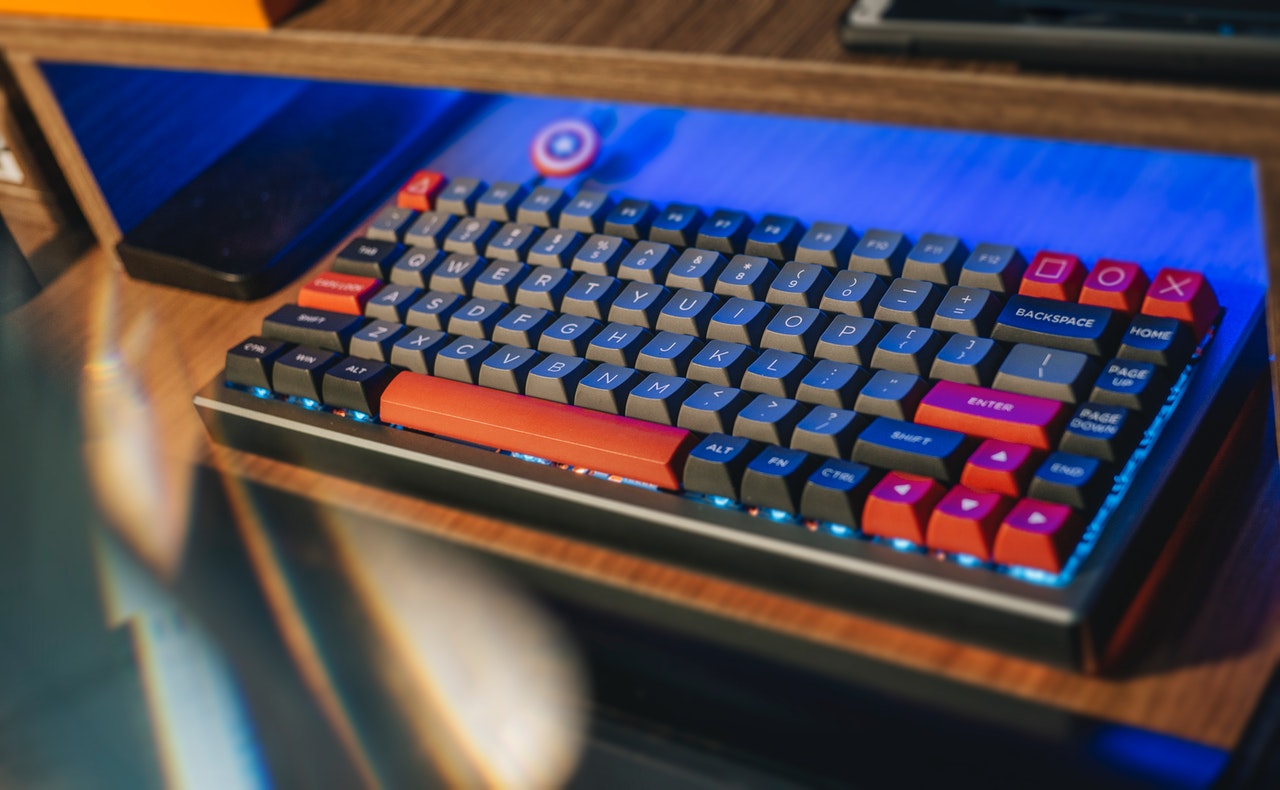 Keyboards come in all sorts of different shapes and sizes to suit different preferences. Some people prefer full-sized keyboards with the numpad and even extra macro keys while some are more comfortable with smaller, more compact keyboards.

In this article, we’re comparing 60 and 65 keyboards so that you know the difference and can make the right choice.

The most obvious difference between the two is the actual keyboard size. As the name suggests, 60 keyboards have 5-6 keys less than 65 keyboards, meaning they’re smaller and more compact.

This is great for people with smaller desks or who frequently travel with their keyboards as a 60 keyboard can be as much as 12 to 15 centimetres smaller than a full-size one. Yes, you do give up the numpad and some other keys, but a lot of keyboards offer layered key structures and programmable keys which can make up for the difference.

This difference in size also plays a big part in how quickly you get used to the keyboard. While a 65 keyboard definitely doesn’t have as many keys as a full-size one, it still has the keys placed mostly where your muscle memory from a bigger keyboard would expect them, meaning you’ll get used to the keyboard much faster. As for 60 keyboards, since the keys get moved around to fit everything on a small board, you might have a hard time getting up to your optimal typing speed at first.

Another major difference between the two is the layout. 60 keyboards often sacrifice the arrow keys and some other additional modifier keys in order to shrink the keyboard down. Depending on your use case, this can be rather problematic.

If you’re a gamer who requires arrow keys or you work a lot with any program that’s easier to navigate with a keyboard, chances are you’re going to end up missing the arrow keys on a 60 keyboard a lot. That’s not to say that no 60 keyboard comes with dedicated arrow keys, but they’re definitely less in number.

Compared to 60 keyboards, 65 keyboards will often have a dedicated set of arrow keys and other keys that are usually found on top of the arrow key cluster to the side. You really don’t sacrifice much when it comes to space but get a lot more keys.

Also read: How to lube switches?

Both keyboard formats offer layered keys and programmable buttons to compensate for missing keys. That said, since 65 keyboards have more keys than 60 ones, you’re going to have to use far fewer keyboard combinations or program fewer keys to work a particular way.

If you’re okay with managing tons of macros or don’t exactly need much outside of the main QWERTY keys, you won’t feel much of a difference. However, if you often use keys like the arrow keys, Page Up, Page Down, Insert, Home, End and Delete among others, you’re going to have to reach out for that Fn key a lot more than you would have to on a 65 keyboard.

Both keyboard styles are kind of in the same boat here. They both make sacrifices in order to fit all the keys inside a smaller space meaning a particular keyboard might have custom keycaps that can’t be switched out with off-the-shelf ones or you might not get a hot-swappable board where you can change the switches according to your preference.

However, there are still a lot of keyboards in both categories that do let you switch out at least the keycaps.

Depending on what keyboard you buy, the switches, the build and the customisation as well as lighting options, the price of the two keyboards can often be rather similar. That said, availability is a different thing.

65 keyboards are slightly more popular as compared to their 60 key counterparts as they tend to appeal to a larger group of people by striking a near-perfect balance between being compact and having all the keys required for smooth daily operation. For this reason, 65 keyboards are available in more options and are generally easy to find.

The answer comes down to your personal preference workflow. If your workflow requires the frequent use of arrow and modifier keys found to the right, you’re better off with a 65 keyboard. If you don’t really care about modifiers and arrow keys and are just looking for the most compact keyboard possible that doesn’t sacrifice key size and the QWERTY layout, 60 keyboards are definitely not a bad choice either.