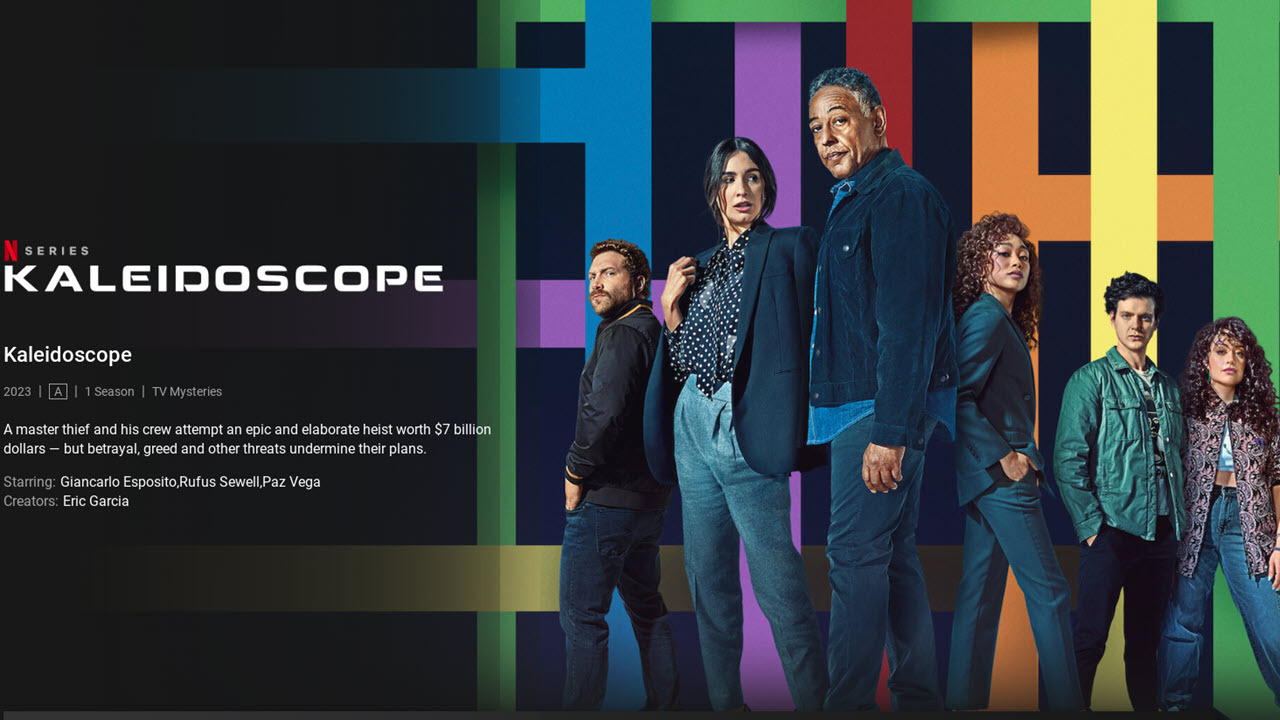 Netflix rang in the new year with Kaleidoscope, an American miniseries based on a heist pulled off by a crew of misfits. This heist series differs from other similarly plotted shows and movies. Kaleidoscope is an eight-part series, and you can pick any episode randomly, roll the dice or pick one blindfolded. Whichever method of probability you decide to go with, Kaleidoscope delivers by playing every episode from a different time stamp.

In this article, we will be diving into what can be the right colour sequence to watch the series in and get a clearer picture.

The way Kaleidoscope has fashioned its episodes, giving users a choice to choose their own path, has intrigued many and reminds us vaguely of Black Mirror’s Bandersnatch episode. Eight options to choose from are both exciting and mysterious. This excitement covers up for a moderately performed heist with all the oomph but improper execution that leaves the viewer unsatisfied.

Fear not, we will not ruin your experience but smoothly guide you in the order that you can choose to watch the series. Remember, this is an anthology series, so the events of this story will not be repeated. A new season will probably show a different set of characters and stories.

The series stars Giancarlo Esposito, Rufus Sewell, Paz Vega, Tati Gabrielle, Peter Mark Kendall, Rosaline Elbay, and Jai Courtney. It has covered the heist from 25 years before it takes place till six months after the heist. You can watch this series for the excitement of getting a choice; however, keep your expectations low.

The way to begin the series

We can tell you the chronological order to begin the series:

The series revolves around the main character, Leo Pap or Ray Vernon, played by Giancarlo Esposito, who is out to get his ego satisfied. 24 years before the heist, he was wronged by his close friend, Graham Davies, and now wants to even the score.

His close friend, now known as Roger Salas, is the founder of SLS, a famous corporate security firm. He has designed what he thinks is the most secure vault in the world. Until Leo pops it open.

You can watch the series in an orderly manner, or you can mix it up to create a mystery. It might be fun to take various threads of different colours and mix them up to see which timeline goes connects where.

In my personal opinion, I found that even though the episodes were built to be completely random, it felt like I was missing out on some information. For example, there wasn’t a lot of depth in some of the main characters as they barely had any background story. Keeping the characters just detachable enough to plunge them into any narrative.

However, it has been taken care to build every episode independently while simultaneously connecting with the main theme. An example is not knowing Hannah had met her dad till the third episode of the colour sequence followed. Kudos on that; the storyline was not completely predictable.

Remember that the sequence given below is completely from one person’s point of view. There might be some spoilers, so if you haven’t watched Kaleidoscope, be wary.

(P.S. In no way should you feel compelled to follow this colour-coding sequence)