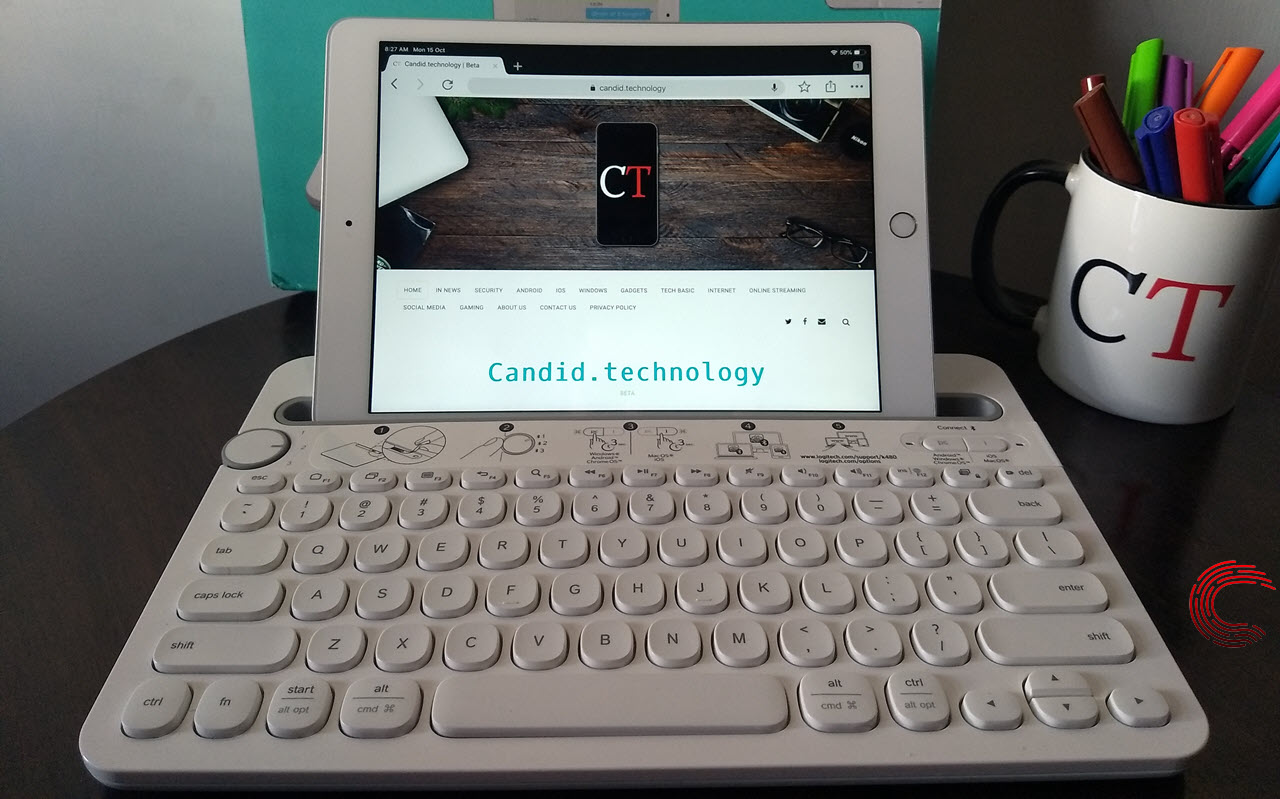 Logitech K480 keyboard, which was launched a few years back is one of the most budget-friendly Bluetooth keyboards out there in the market and although it might not seem so at first, it is pretty easy to pair.

If you’ve just purchased the wireless keyboard, once you get it out of the box, you’ll see a thin sticker hanging out from the battery panel on the rear. 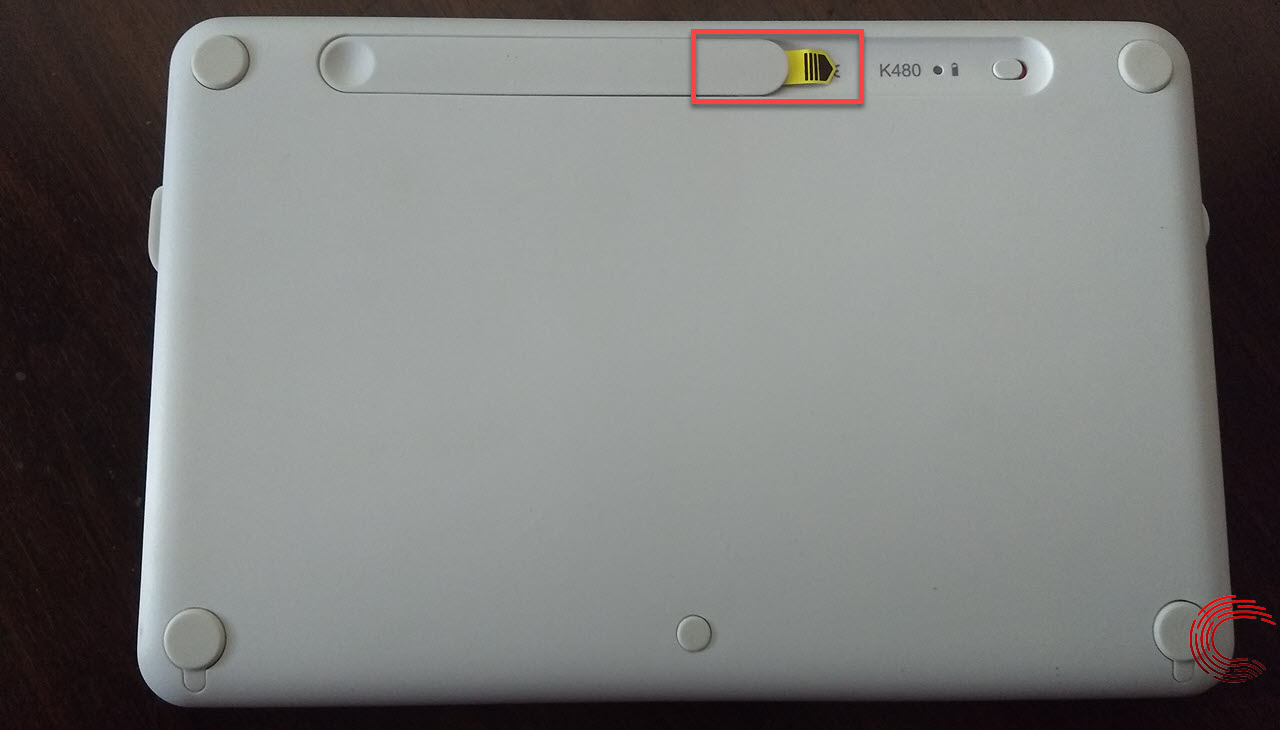 Next, you’ll need to switch on the power button located right beside the ‘K480’ marking at the rear via the toggle button. Once switched on, you’ll momentarily see the green light on the rear. The toggle button is also colour coded and you’ll see green on the slider when it’s switched on. 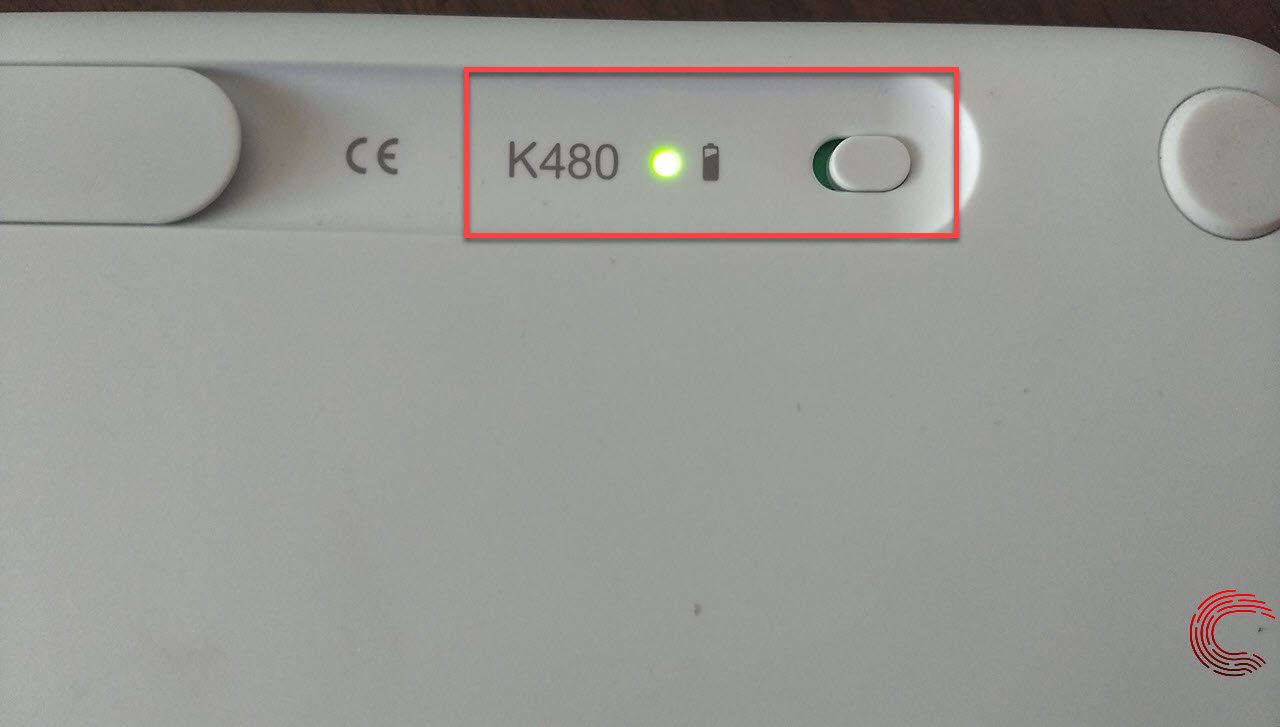 Once that’s done, set your dial (located on the left top corner) to the preferred position. The Logitech K480 lets you pair to up to three devices at a time and switch between them via the dial which has numbers 1, 2 and 3.

Next, you need to locate the ‘pc’ button if you wish to connect the keyboard to a device running Android, Windows or Chrome OS and the ‘i’ button to connect to an iOS or macOS device. 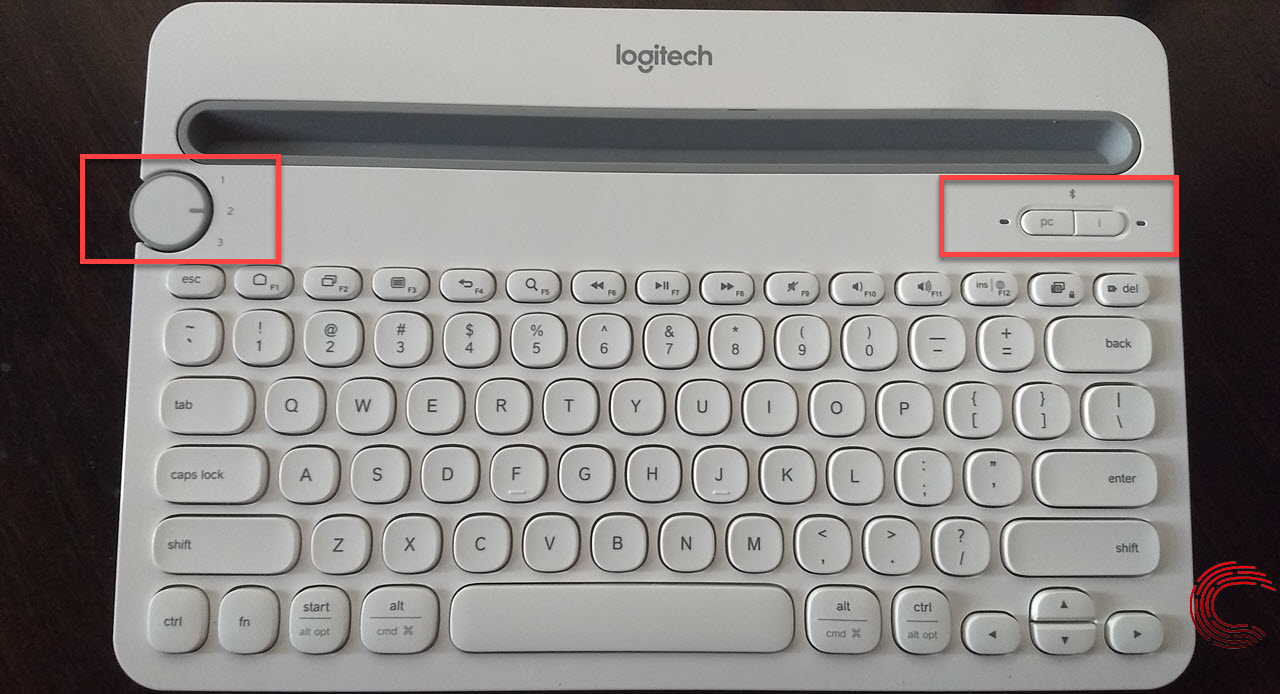 Make sure the Bluetooth of the device you wish to connect is switched on and ready to pair. Now press and hold the ‘pc’ or ‘i’ button for 3 seconds until it starts blinking (blue).

Now search for available devices to pair from your phone, tablet or PC and connect to ‘Keyboard K480’.

You can move the position of the dial to connect a different device to the keyboard — a maximum of 3 at a time are possible. You can switch between paired devices on the go too.

Read on to know about all the features, drawbacks and our review of the keyboard.

What is in the box?

The Logitech K480 comes with 2 AAA batteries included and a not-so-useful battery manual. 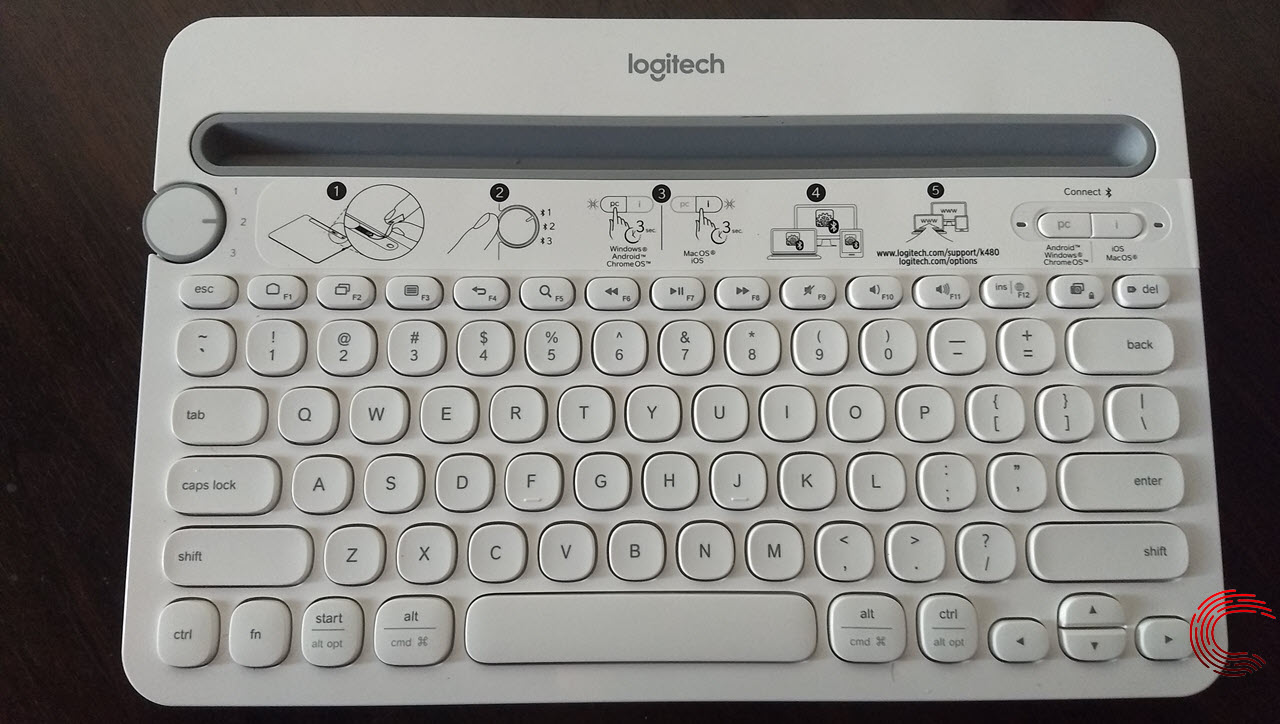 The keys are well spread out, making it easy to write. The slot at the top of the keyboard to support your tablet or smartphone is also well built and inspires confidence as the device doesn’t shift even if you move the keyboard in moderation.

The design of the keyboard might feel a little heavy when compared to other cheaper counterparts on the market. The keys on the Logitech K480 are quite receptive and quiet too.

You can place your device horizontally or vertically and the panel on the top of the K480 keyboard holds it pretty well. 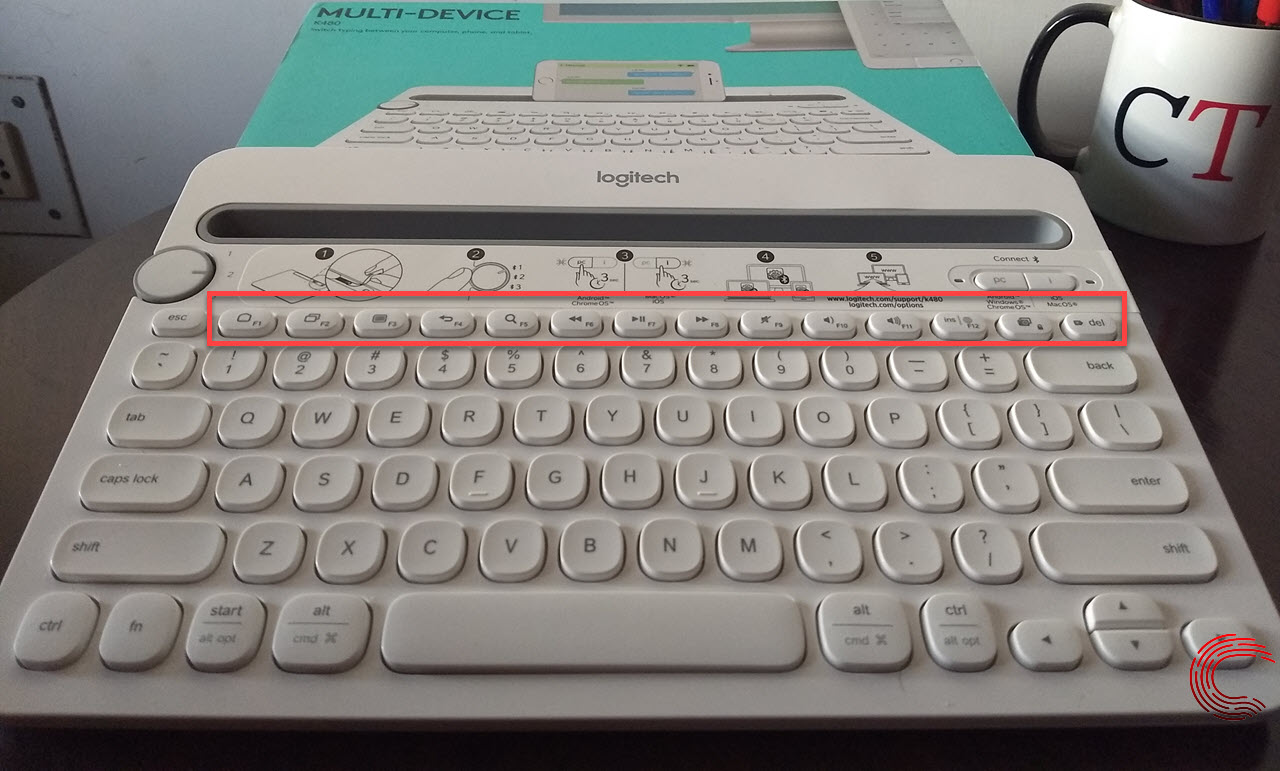 The Logitech K480 might be a budget offering but has dozens of features on offer for its users.

Note that once connected, the virtual keyboard of your device will not appear unless you set your preference otherwise via Settings. 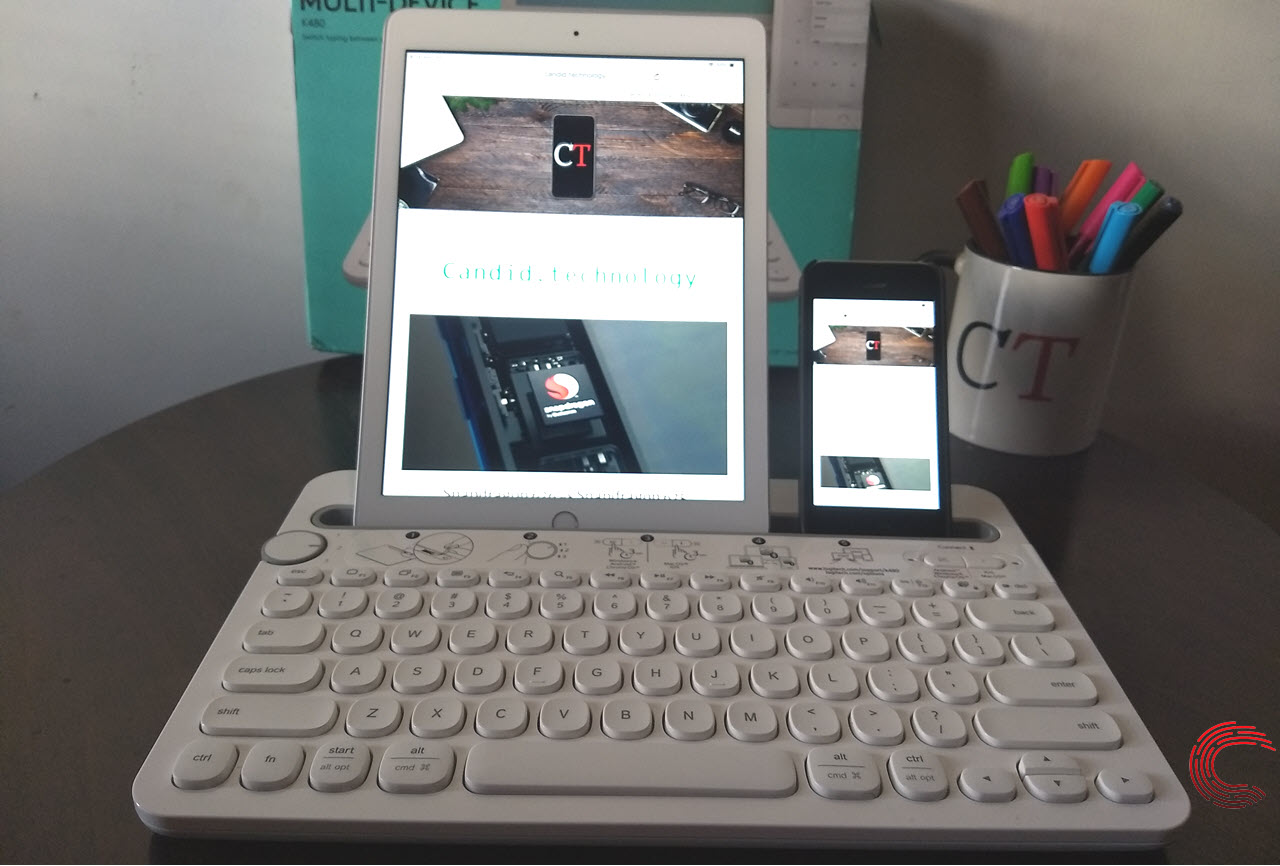 At times, if you’re typing too fast, there is a bit of lag as the text appears a little later on your device. Some other times — probably due to the lag — a single alphabet is repeated multiple times.

In the world ripe with devices powered by built-in batteries, the Logitech K480 uses a pair of AAA batteries. This has both pros and cons to it. The pro being, the keys on your K480 will outlast the batteries, and the obvious con being that you’ll have to switch batteries every now and then.

But we don’t think it takes much effort to carry an extra pair of small AAA batteries with you.

To sum it up, at INR 1800, the keyboard is a pretty sweet deal considering it can perform as many functions as we listed above. And the fact that it has the ability to switch between devices on the go is an added bonus to the package.

If you’re looking for a budget wireless Bluetooth keyboard to work with your smartphone, tablet or even your PC, look no further as the Logitech K480 is a complete value for money deal.

This review was partly written while working on an Android device running Android 8.1 Oreo and partly on an iOS device running iOS 12. In both the cases, the keyboard lagged if you’re typing too fast — words appeared on the screen after a while.

Also read: Can data be recovered after a factory reset and how to avoid that