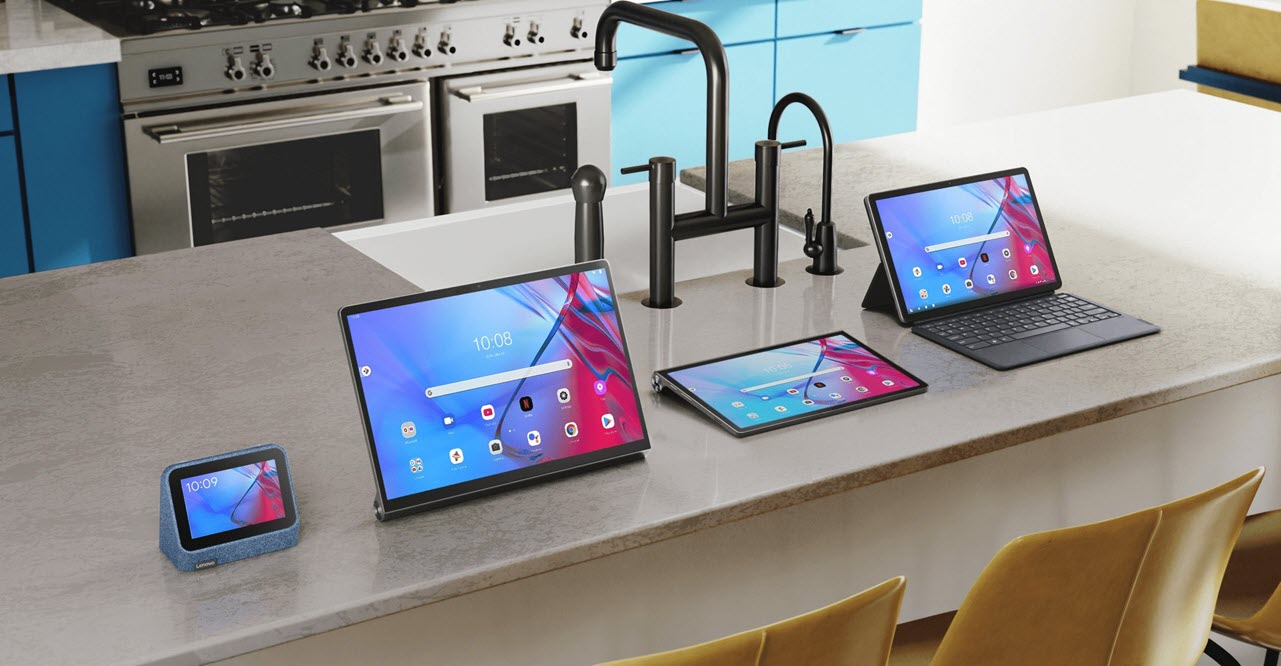 Lenovo announced the Yoga Tab 13, Yoga Tab 11, Tab p11 Plus, and an update to its Smart Clock ahead of MWC 2021 on Monday. The company also unveiled the budget third-gen Tab M7 and Tab M8.

The big selling point here is the Yoga Tab 13, which can also double up as an external monitor for just about any HDMI capable device, including laptops, consoles and whatnot. The tablet is coated in an anti-fingerprint coating and has a kickstand that doubles up as a hanger. It’s also compatible with the Lenovo Precision Pen 2.

The other offering — Yoga Tab 11, is a more family-friendly device that comes with an 11-inch 2K IPS display, pen support, and an optional LTE variant. The Tab P11, M7 and M8 are mostly budget-oriented tablets focusing on entertainment and are compatible with the Google Entertainment Space.

Lastly, the Smart Clock 2 is essentially a Google Assistant-powered smart display that comes with a 4-inch screen and comes with an optional wireless phone charger.

In the News: Microsoft Windows 11 announced: 5 things to know

The tablet that doubles up as your monitor

As mentioned earlier, the big selling point with the Yoga Tab 13 is that it can double up as an external monitor for HDMI compatible devices thanks to the included micro-HDMI to USB cable.

The tablet is powered by a Snapdragon 870 and 8GB of LPDDR5 RAM along with WiFi 6, which should give it just about all the power and connectivity you’d need for a tablet. The tablet also supports Google’s Entertainment Space, and the exterior’s covered in black Alcantara.

Much like its elder sibling, the Yoga Tab 11 tries to capture the same essence, although with a little bit of a weaker package. The tablet is powered by MediaTek Helio g90T — MT8185 powers the WiFi version, and the LTE variant is powered by the MT8789.

There’s an 11-inch 2k LCD display that goes up to 400 nits of brightness. There’s a 7500 mAh battery with 20W quick charge, although a slight bump in quick charge wattage would’ve been nice to see. You also get quad JBL speakers along with Dolby Atmos.

In the News: 129 Dell device models at risk from SupportAssist bugs

The Tab P11 Plus is in a lot of ways a stripped-down version of the Yoga Tab 11 to make it cheaper and more appealing to the masses.

The Tab M7 and Tab M8, both Gen3, are the budget-oriented tablets in the release. They’re quite similar in design, with the M8 getting slightly better internals.

The M8 comes with the Helio P22T, although Lenovo hasn’t put out any RAM and storage numbers yet. There’s a WiFI and LTE variant, and the screen is slightly better than the M7 coming in with an 8-inch IPS panel (1280×800) with the same 350 nits of brightness.

As mentioned above, nothing exactly stands out when you look at the Smart Clock 2. It’s powered by a MediaTek MT8167S with 1GB RAM and 8GB onboard storage, so not a lot to play with here.

The display is a 4-inch IPS LCD panel coupled with 1.5-inch 3W front-firing speakers. There’s no camera under the pretext of privacy. The only good thing here is the wireless charging dock that the clock comes with that can be useful for the right audience.

The Lenovo Smart Clock 2 will be available in Europe, the Middle East and Asia from August 2021 starting at €89.99, including the wireless charging dock.