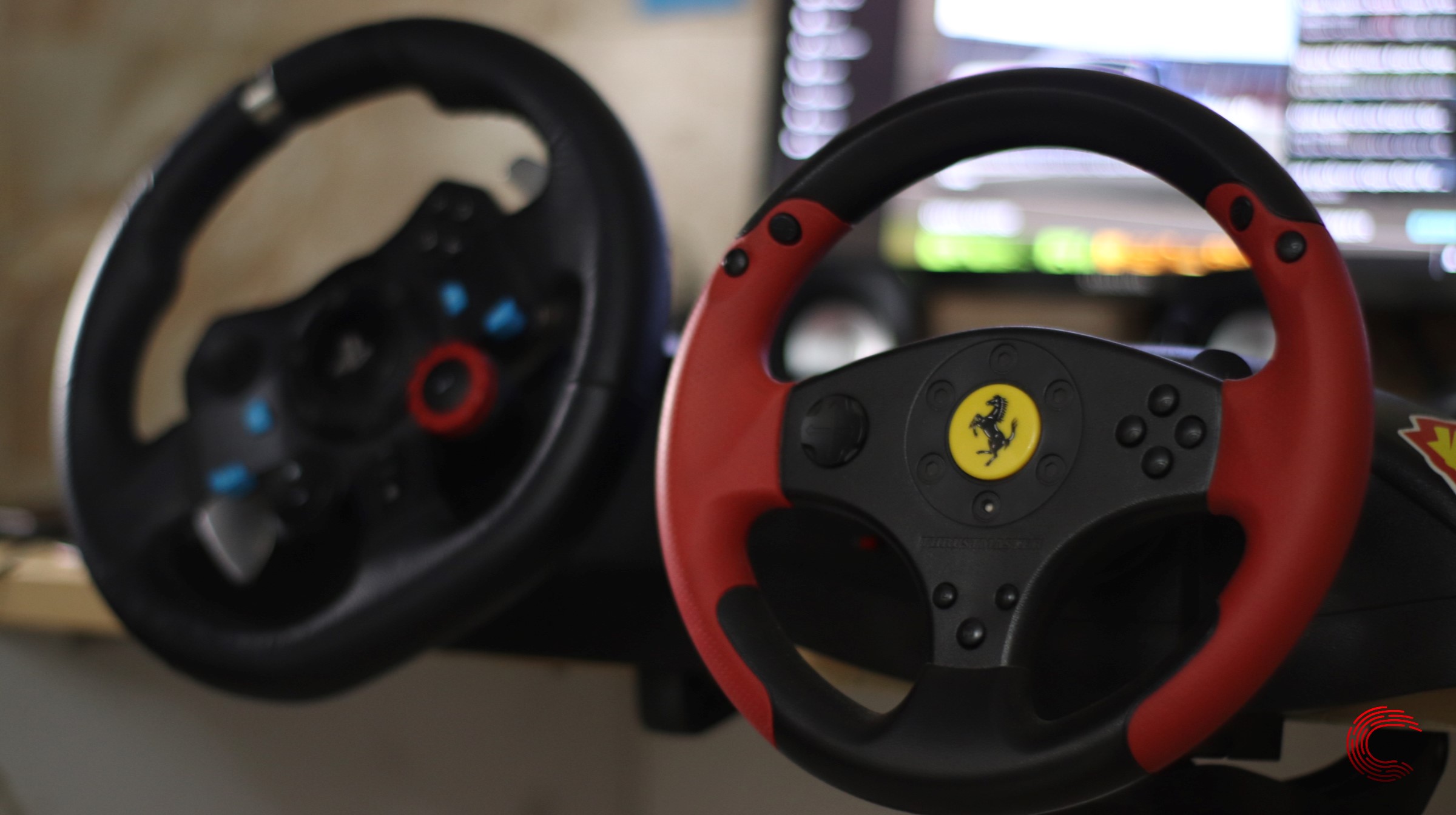 Sim racing is still mostly seen as huge cockpits surrounded by giant triple monitors and an exuberant gaming PC in a rig coming together for thousands of dollars. Well, you’d be glad to know it’s more than that.

You see, the barrier of entry to sim racing has been lowered to a point where just about anyone can hop in. Yes, your experience might not be as ‘realistic’ as in a $10,000 sim racing cockpit, but you can still have fun, and more importantly, you can always be competitive.

In this article, we’re going to compare two entry-level wheels, at a very different price tag that both can get you into the sim racing world — the Thrustmaster Ferrari Red Legend Edition (hereafter referred to as the FRL) and the Logitech G29.

The G29 straight up. There’s not even a debate about it. However, it is a little bit more complicated than that.

While the wheels do arguably the same job, they do it in a very different manner and that’s where you experience gets affected. So let’s talk about each of the individual components on here.

Note that the sim I’m using to compare the two wheels is iRacing.

The look and feel of the Wheel

Starting with the main attraction here, the G29 and the FRL are two very different wheels. There are a lot more buttons on the G29 and a lot more control in terms of handling a car on the track.

The FRL is a very small plastic wheel with rubber grips where you’d hold the steering. It works just fine for the most part, except for two of its biggest shortcomings.

The wheel only rotates about 90 degrees in each direction and has absolutely no force feedback. This might not bother you at first or in casual games, but the second you get into a serious sim like iRacing, you’ll find yourself begging for more rotation and that force feedback.

Even if you take all the fancy bells and whistles out of the G29, the sheer rotation range, the force feedback and the rim size make the whole experience way more enjoyable than the FRL.

Having more rotation lets you control your cars far more precisely than the FRL and the FFB becomes simply essential at a point. Using the FRL, you’re mostly driving on memory, you find the limits by trail and error and you stay between them. There isn’t a lot of room for experimentation.

With the G29 though, the whole experience changes. You’re able to feel the weight transfer and grip from the tires and that lets you make instant decisions on track. It also just elevates your immersion and experience by miles,

Feedback of the Pedals

The pedals are just as important (if not more) as the wheels. Let’s talk about the FRL pedals first.

There’s nothing too special here. The pedals are plastic made and are potentiometer based. In terms of basic functioning, the G29 and the FRL pedals are basically the same.

However, the FRL gas and brake pedals are essentially the same. The brake just having a heavier spring on it that requires more pressure than the throttle. The G29’s brake pedal, however, has a progressive feel to it. it means that the brake gets heavier as you press harder, much like a real car.

This difference in the brake pedal is notable when driving something like the Dallara F3 or the Cadillac CTS Racecar. The probability of locking up way less and you save a lot of time under braking. Not as good as a load cell pedal but the next best thing on a budget.

Oh and the G29 also has a clutch pedal. You can use a button on the FRL wheel as the clutch instead(like I did) if all you ever use the clutch for is race starts. However, if you’re into rallying or want an H pattern shifter that clutch is really helpful.

Ease of use and accessories

Both wheels were pretty straightforward to set up on iRacing. However, for other sims that I tested the FRL on — RaceRoom, F1 2019 and Project Cars 2, setting up can be quite a task.

Also, I felt the need to retweak the FRL every now and then, especially when I got into another car. The experience isn’t as ‘plug-and-play’ like the G29, which is supported by most if not all sims out there.

On the extras front, the G29 has an optional H-pattern shifter than you can buy separately, has a really nice handstitched leather steering cover a bunch of buttons and even a dial on the wheel and engine rev lights.

The FRL? Well, it’s a plastic tube with some buttons on it. That’s about it. If you really wanted to, you can plug in the T3PA Pro pedal set from Thrustmaster in but those are way more expensive than the wheel itself. You’re way better off buying a T150 Pro set if you’re into Thrustmaster.

Which gaming wheel should you buy?

The G29, obviously. However, keep in mind that you’re paying 10 times more than you would for the Ferrari and that in my opinion is enough to sway decisions.

On the FRL, you can be competitive. However, it’ll take you a lot more time, effort and practice to get there. And you will develop some bad habits along the way which you will only realise when you progress over to a better wheel.

On the G29, you’ll reach that same proficiency much faster while having a lot more fun along the way. The level of immersion and control that you get is simply amazing.

So if you’re unsure about sim racing yet, I’d suggest go for the FRL and test out the waters, if you like it, try and upgrade as soon as possible. Sim racing can seem intimidating to get into, but keep in mind that all this is still cheaper than a set of tires on a track day, let alone a track car.