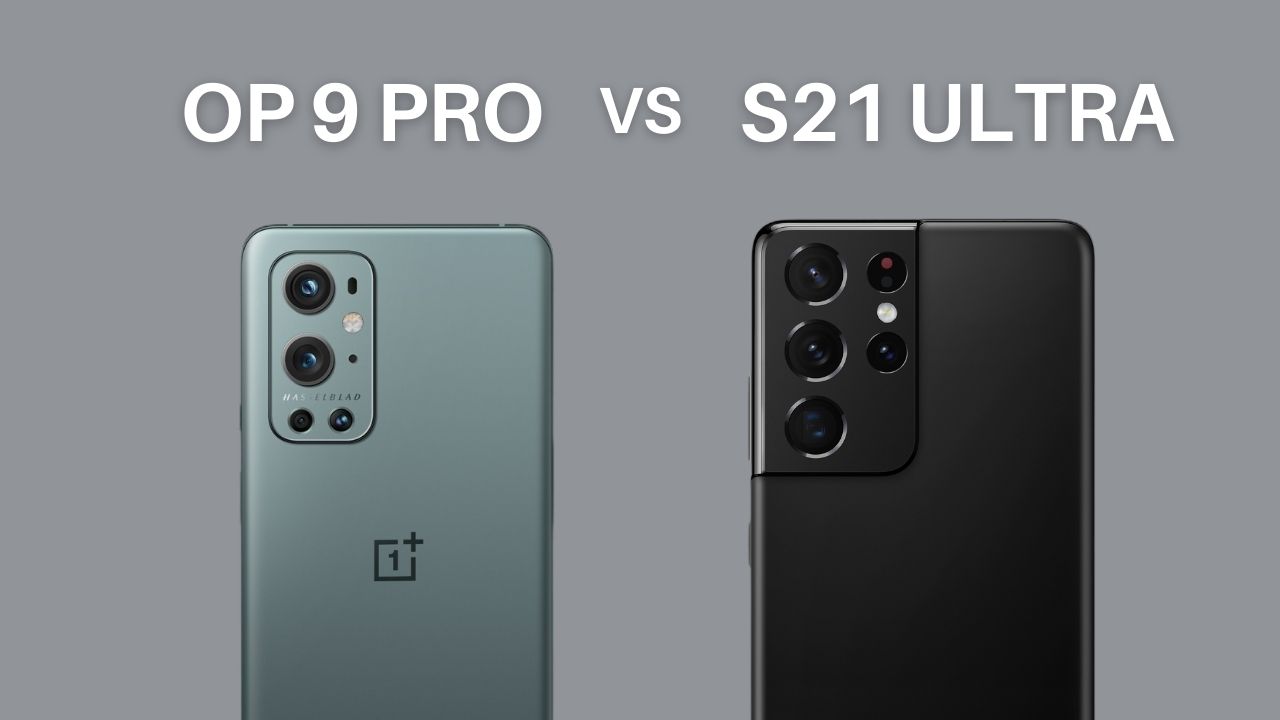 OnePlus unveiled its 9 series smartphones and the OnePlus Watch at an online event on Tuesday. With a focus on the camera performance, courtesy of a partnership with Hasselblad, has OnePlus done enough to differentiate itself from the competition?

In this article, we pit the OnePlus 9 Pro with Samsung’s top of the line device, the S21 Ultra and see how these two devices compare and suggest which of the two you should pick.

The first difference anyone would notice on the back of these smartphones will be the camera module.

Samsung’s phone offers a significant camera bump with recessed lenses, a look that may even prevent damage to the camera glass when kept on a table. On the other hand, OnePlus 9 Pro features its Hasselblad branding and extruded lenses — although two of them do seem recessed like the Galaxy.

On the front, the devices show a difference in front camera placement, while Samsung has gone with a centred position, OnePlus does offset their front-facing shooter to the left of the screen.

Both devices feature IP68 water resistance with their glass and aluminium build and come in multiple colour options. Samsung offers Black and Silver while OnePlus has Black, Silver and Green.

The OnePlus 9 Pro features a 6.7-inch QHD+ (3216 X 1440) AMOLED Panel with a 120Hz refresh rate, which is becoming the industry-standard at this price. Samsung’s S21 Ultra also features a QHD+ AMOLED panel which sizes in at 6.8-inches, also refreshing at 120Hz.

But they differ in their support for accessories and the capability of the LTPO panel utilised. OnePlus’ hardware allows the screen to refresh between a range of 1Hz to 120Hz, while the Samsung adapts between 10Hz to 120Hz.

Apart from this difference, while Samsung is said to offer a peak brightness of 1500 nits, OnePlus achieves a claimed 1300. Both panels offer HDR10+ certification.

Like we’ve written before, images captured from smartphones are dependent on the post-processing they undergo. This year OnePlus announced a three-year partnership with Hasselblad, the first of which, they say, results in improved colour science.

To support this advancement, the OnePlus 9 Pro features a 48MP primary sensor, a 50MP Ultra Wide, an 8MP Telephoto and a 2MP monochrome lens. According to the OEM, their smartphone can now record 4K footage at 120 frames per second due to the custom-made primary Sony IMX 789 sensor.

In the front, Samsung packs in a 40MP shooter while OnePlus has a 16MP unit.

As expected, this year’s smartphones feature new SoC’s, which offer a significant generational leap. The Snapdragon 888 or Exynos 2100 — a Qualcomm chip’s availability in Samsung phones, depends upon region — present inside these devices feature integrated 5G modems and a 5nm fabrication process for increased efficiency.

These chips offer 25 and 30 per cent improvement in CPU performance over the last-generation — Snapdragon 865 and Exynos 990 — respectively.

The devices are available in the following variants.

OnePlus 9 Pro is available in two configurations in India and one in USA.

Samsung S21 Ultra is available in the following three configurations.

The displays and chipsets on the OnePlus 9 Pro and S21 Ultra are 4500mAh and 5000mAh cells. While both feature fast-charge technology, OnePlus, holds a significant advantage due to its faster 65W Warp Charge standard when compared to Samsung’s 25W charging.

An advantage that Samsung holds is its 4.5W reverse wireless charging. The last generation OnePlus 8 Pro was said to feature this but, there was no mention of its availability on the 9 Pro throughout the online event.

Also read: How to get a detailed battery report on Windows 10?

To pick between the two, the points you should consider are their software experience and battery performance.

OnePlus is known for its close to stock Android Oxygen OS user interface, whereas Samsung’s One UI is known for its plethora of settings.
If you are a user who tinkers with their phone and is interested in customising a device to make it feel like their own, Samsung may be the device to pick. Although, the presence of advertisements within the notification shade and other system applications is a letdown.

As mentioned earlier, OnePlus offers a significantly better battery charging experience than the one Samsung bundles — and even includes a charger within the box. So if you are a heavy user, bound to require top-ups throughout the day, OnePlus might be the better option.