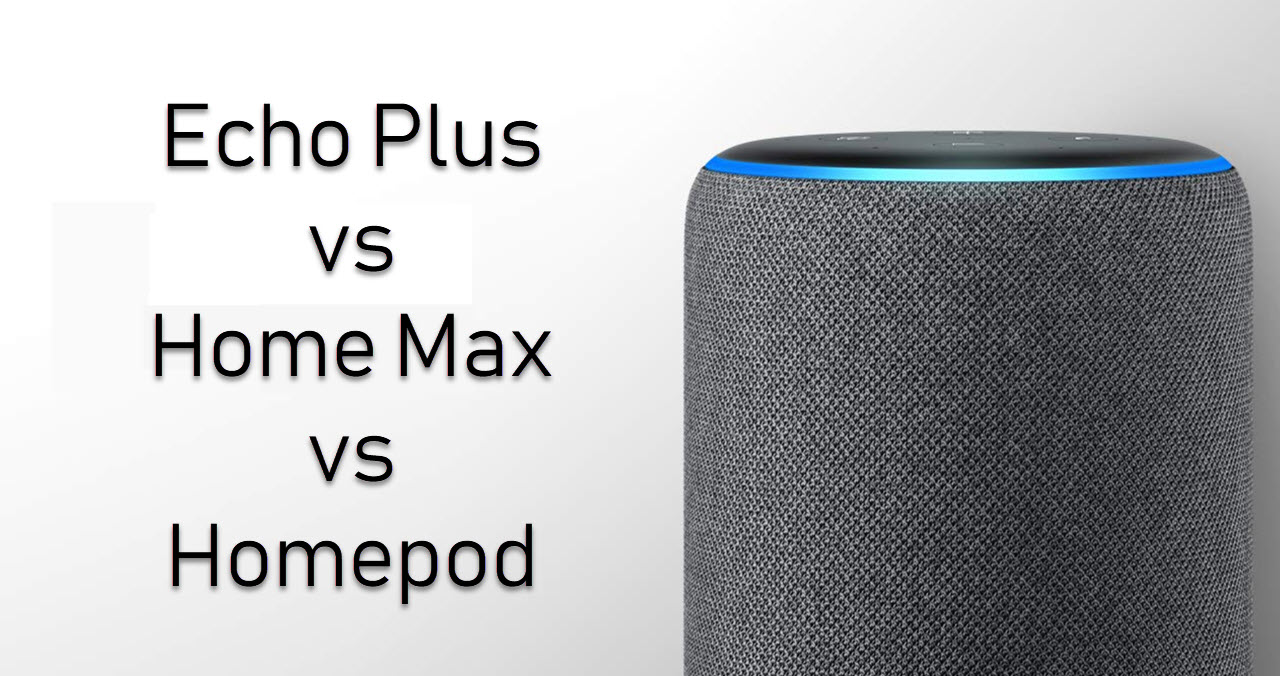 The smart home ecosystem has been growing steadily ever since Amazon announced the Echo smart speaker in 2014. These smart speakers tie in all sorts of smart devices around your home and can throw up answers for most questions that you need answers to via an AI-powered smart assistant. The effect that these speakers have had has also made the technology of a voice assistant move into our bedrooms as an alarm clock alternative in the form of a smart display.

In this article, we are going to compare the top of line offerings from each company — Amazon’s Echo Plus, Google’s Home Max and Apple’s HomePod — the devices that have been pushing the smart home motion ahead with every new development in technology.

Coming to how the devices look, the Echo Plus(2nd Generation), the Home Max and the HomePod are all speakers covered in a mesh-like fabric which melts right into your home decor. The Echo Plus and HomePod are both cylindrical in shape and provide 360-degree audio and are considerably smaller in size while being compared to the Home Max which is a huge rectangular shaped box that pumps out really loud audio.

The fact that Google’s speaker can only play audio in one direction also limits the way it can be placed in the house, a problem that the other two speakers do not face.

In terms of control, the Apple’s speaker has a clean looking display on top with gestural function, the Max has a touch bar along its side which can perform functions like increasing the volume and stopping and playing music and the Echo Plus has buttons on the top to control it.

The undisputed winner in this criteria is Apple’s HomePod. Its speakers may be small in size but it is no pushover even up against the large Home Max. The one device that is the worst off in this competition is Amazon’s Echo Plus. Its decent audio quality cannot match up to the standard set by the other two. It does not get as loud as the Max but fails to match the clarity of the HomePod.

The HomePod has a custom set up of 7 beamforming tweeters and a woofer which work in conjunction with Apple’s A8 chip to produce high-fidelity audio. The Max, on the other hand, has two woofers and two tweeters and provides stereo audio when placed horizontally. The Echo only houses a woofer alongwith a single tweeter that provides a deeper and richer sound than the last generation device.

The most functional device in case of multiple streaming sources is the Home Max as it can pair with any device within the Home family of smart speakers to simultaneously play music. The Echo Plus can only pair with another Echo Plus(and the Echo Sub which is an accessory device) and not with any other device from Amazons’ line of speakers, just like the HomePod which only pairs with an equivalent to enhance the experience.

Which one of these would we pick?

When it comes to functionality, all these speakers can perform the basic tasks of controlling your home without any hassle. They can turn the temperature up, turn the lights off and what not. The Assistant can also sync with your phone and make it easier to contact people and set up reminders and keep going without any breaks. Siri can perform basic functions for iPhone owners as well. Alexa, on the other hand, is more or less limited to home use, but that is where the Echo shines the most.

For $350, the HomePod is the best choice if you own an iPhone because of how the device ties into the ecosystem. Apple marketed the HomePod as a speaker first and then a smart assistant, hence the functionalities that Siri provides are more of a bonus and while it provides the basic functions mentioned earlier it is not our top choice.

The Home Max comes in at $399 and all it offers over the HomePod or the Echo Plus is its tie in with Google functionalities but fails to justify the price tag.

This leaves us with the Echo Plus which comes in at $149 and offers, decent audio quality (nowhere up to the mark of Google’s or Apple’s devices) but still does everything that it is advertised to do. The inbuilt smart hub functionality also makes it slightly more capable than the other two devices and when paired with Amazon’s Echo Sub it provides a great music listening experience, making it the device to bring home.

So, unless you have an iPhone and are looking to add more Apple stuff to your smart home, the HomePod is the way to go. However, if you just need a smart home speaker that works with all things smart except your phone, then Echo makes more sense considering the price point.

However, if you’re going for the Echo Plus, you should strongly consider giving this article by Will Oremus for OneZero (Medium’s tech and science publication) a read before you embark on a journey with smart tech supported by Amazon’s Alexa.