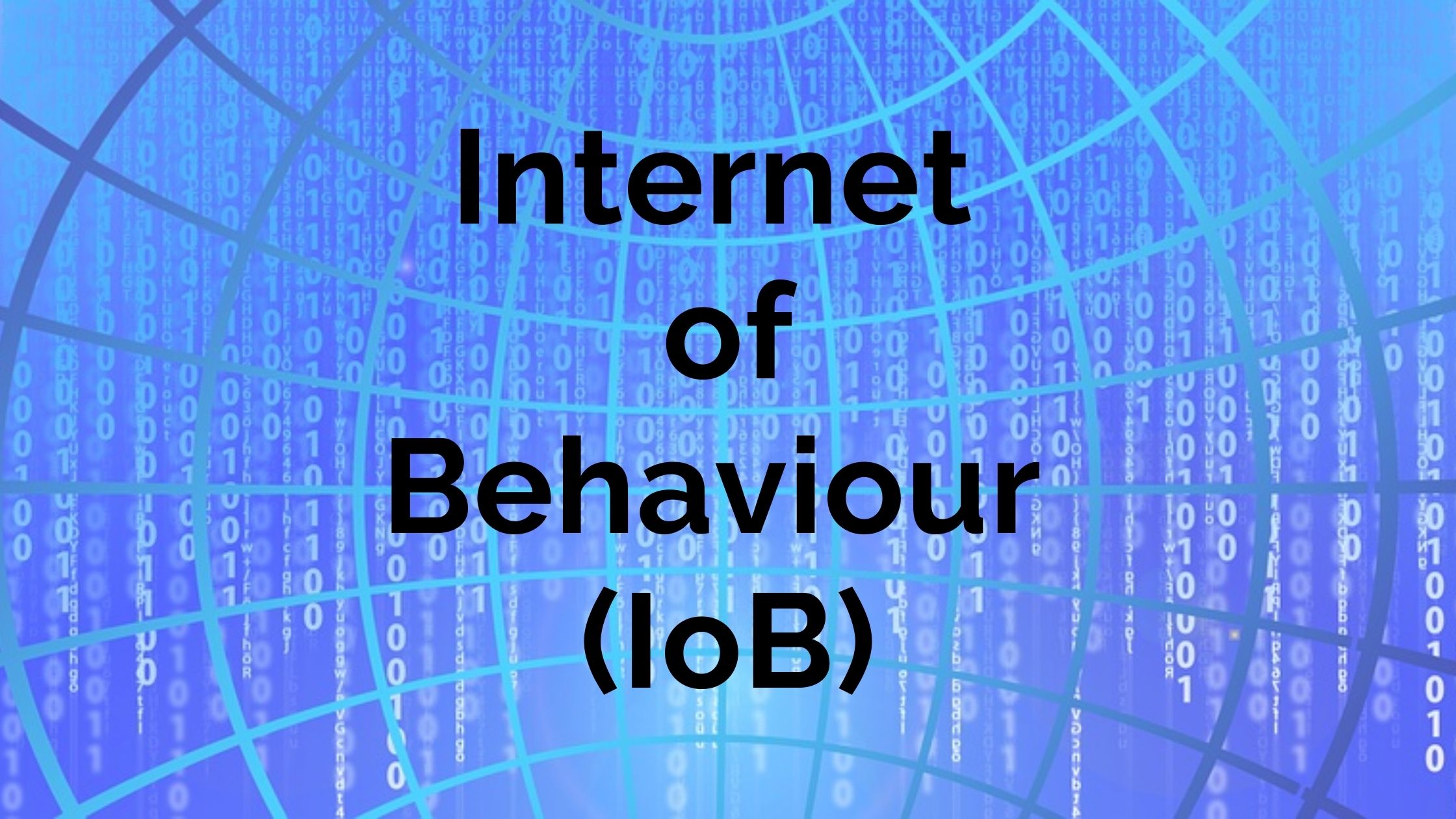 Internet is a global connection of various electronic devices that help communicate with anyone globally, access information, and perform almost any imaginable task. IoT is a technology that has been out in the market for quite some time now and has become a part of many integrations. IoB, however, is a relatively new technology, finding its way through the industry.

In this article, we will discuss:

Internet of Behaviour can be called the extension of IoT. This technology first arose in 2012, when a psychology professor, Gote Nyman, mentioned that using behaviour integrated with IoT can help obtain better data on customer usage; and has gained immense popularity in 2020 and 2021. By 2023, it is predicted that 40-50% of the global population’s individual activity will be tracked and monitored digitally to influence human behaviour.

IoB, according to Gartner, combines the different technologies that focus on facial recognition and tracking of the location of the individuals, connecting this data to map them to behavioural events. It revolves around understanding and analysing data from the perspective of human psychology to create and promote new ideas. It collects data from multiple sources about people’s lives and uses it to influence behaviour. The collected data includes user experience, search experience optimisation, interests, preferences and behaviour.

The Internet of Things or IoT technology emerged during the 4th industrial revolution in 1999. The textbook definition states that ‘IoT is a dynamic global network infrastructure with self-conﬁguring capabilities based on standard and interoperable communication protocols where physical and virtual things have identities, physical attributes, and virtual personalities and use intelligent interfaces, and integrate seamlessly into the information network, often  communicate data associated with users and their environments.’

In simpler terms, IoT is a network of internet-connected things that can collect, store, analyse data, and communicate with the environment without any human intervention.

IoT devices can exchange data directly or indirectly with connected devices, collect data, process it locally, and send the data to cloud-based applications to further process the data and perform tasks. The characteristics that set IoT apart from other technologies are:

The most integral parts of any IoT system are the hardware and the cloud platform. The hardware setup helps collect data that can be stored and analysed, and further operations can be carried out. Cloud is a central system that helps transport and delivers data via the internet. While the cloud is not necessary for IoT, any IoT system or device integrates better with the cloud as it gives us more freedom to play with its features and explore more options for launching it.

The most common examples of IoT are smart houses, smart lighting, smart parking, smart Irrigation systems, smartwatches, and many more.

Also read: What is the Internet of Things and 5 other questions answered.

Consider the example of any IoT device. These devices are enabled to track the user’s movements and also their current graphic location. The devices link and integrate well with laptops, vehicles, home security systems, voice assistants and many others. These devices possess all the information given directly to the device and information shared through other connected devices.

All this consumer data worldwide helps the company modify their products for the better and pitch higher sales. An IoT device uses this information to:

While IoT has the power and is widespread across over 75 billion devices, IoB holds the quality to further enhance the data by converting the information or data into knowledge. Integration of devices with IoB can fetch live data on what you like and dislike based on votes, your visits to different places, your orders and a lot more personalised information. We know that IoB deals with behavioural science that helps with better decision-making and is also concerned with emotions, augmentations and companionship.

Consider the example of a health tracker/application. The technology of IoT helps track blood levels, heart rate, steps taken, and sleep patterns. On the other hand, IoB can provide alerts in critical situations and behavioural suggestions for a better and improved lifestyle.

IoT has gained a vast database, but while it can only collect and analyse data, IoB can convert that data into much more helpful information, enhancing the entire experience of using a product.

Considering the different platforms and sources from where data is collected, analysed and stored, controlling its access level becomes extremely difficult. While the big companies like Google, Amazon and Facebook store user data such as browser history, preferences, cookies and even location data. The companies use these entities to provide personalised content and target advertisements. All this data is supposed to be confidential, but data leaks are daily news.

The leaked data can be used for different unethical and illegal work, which can have significant effects on commoners everyday life since they can now be targetted with certain opinions, thoughts or products which they might never need but if blasted with multiple times, can change views in favour of a particular organisation, product or ideology. Different political parties, terrorist organisations, or even researchers can use the targetted advertisements of opinions to influence people wrongly.

The recent case of Cambridge Analytica, seen during the American elections 2016, confirms this theory wrongly using IoB. Cambridge Analytica built psychological profiles in 2013 via an application, ‘This is your Digital life’, that asked 120 personality-based questions. As soon as the user logs in via their Facebook account, the app extracts all the user’s information, including location and contacts. They also extracted data of over 87 million Facebook users’ friends via the Facebook open graph.

The personality test results, collected alongside the user’s Facebook activity, provided enough training data sets. After rigorous training of models, 253 algorithms were developed, and the goal was achieved. The trained model could now take the Facebook likes and make guesses related to personality, political affiliations and others. The first set of successful outputs were obtained in 2014.

The final obtained outputs were communicated to campaign leaders in 2016 to refine their messages. Other than the data they collected, they had additional 253 predictions. These additional 253 predictions were considered the secret ingredient that could predict how an introvert would react to a message compared to an extrovert and ambivert and reversed. By the end of the campaign, an algorithm could create the messages to suit different subsets of people. Hence, the voters were manipulated, and their opinions were affected based on their psychological profiles and Facebook likes.

Cybercriminals also pose potential issues in the world of IoB. They can hack and access sensitive data like delivery routes/patterns, property and bank access codes, and a never-ending list. If sold to other criminals, this data can lead to easier hacking of accounts, give rise to terrorist activities, or even be used for blackmailing purposes, and much worse.

Another increased risk is by the method of phishing. Phishing is a social engineering attack wherein fraud messages trick humans, revealing their personal information such as bank codes and others. While phishing wasn’t as easy before, with personalised data now, the social attacker knows the trick precisely.

These security and privacy risks are seen more in IoB as it emerges, as compared to IoT.

The prevalent media streaming application, Netflix, has an implemented model of IoB. It uses the user insights, previously watched and search/scroll history to forecast the user’s likes and give suitable recommendations. Without the mentioned data, it would be nearly impossible to get the perfect recommendations.

The Insurance sector has benefitted by using IoB models to a large extent. By studying, analysing and interpreting the behaviour, it becomes easier for them to understand if the caused mishap was an accident or a planned incident to claim insurance. This also helps prevent other cases of drink-driving, underage driving, drug influence cases and others.

The COVID-19 pandemic since 2020 has caused havoc throughout the world. As work and educational institutes re-open, maintaining safety becomes a priority, and IoB helps ease the process. RFID tags help determine if there have been any discrepancies in maintaining and following the safety protocols. Multiple restaurants and other delivery applications use this data to proceed with their different plans.

Online advertisements, especially via social media platforms, have become extremely popular in recent times. Platforms like Facebook and Instagram use behavioural data to showcase the more preferable ads to the consumers on their page as they scroll through their feed.

IoB has just picked off, and where IoT is the most widespread technology, it is estimated that by 2025, IoB will be ruling the industry. As IoB technology develops further, cyber risks should ideally go down; however, real-world applications could vastly differ.

The behaviour-related study will make it easier for corporations to understand and pursue customer relations better, which can result in better-made products that suit people’s personal needs.