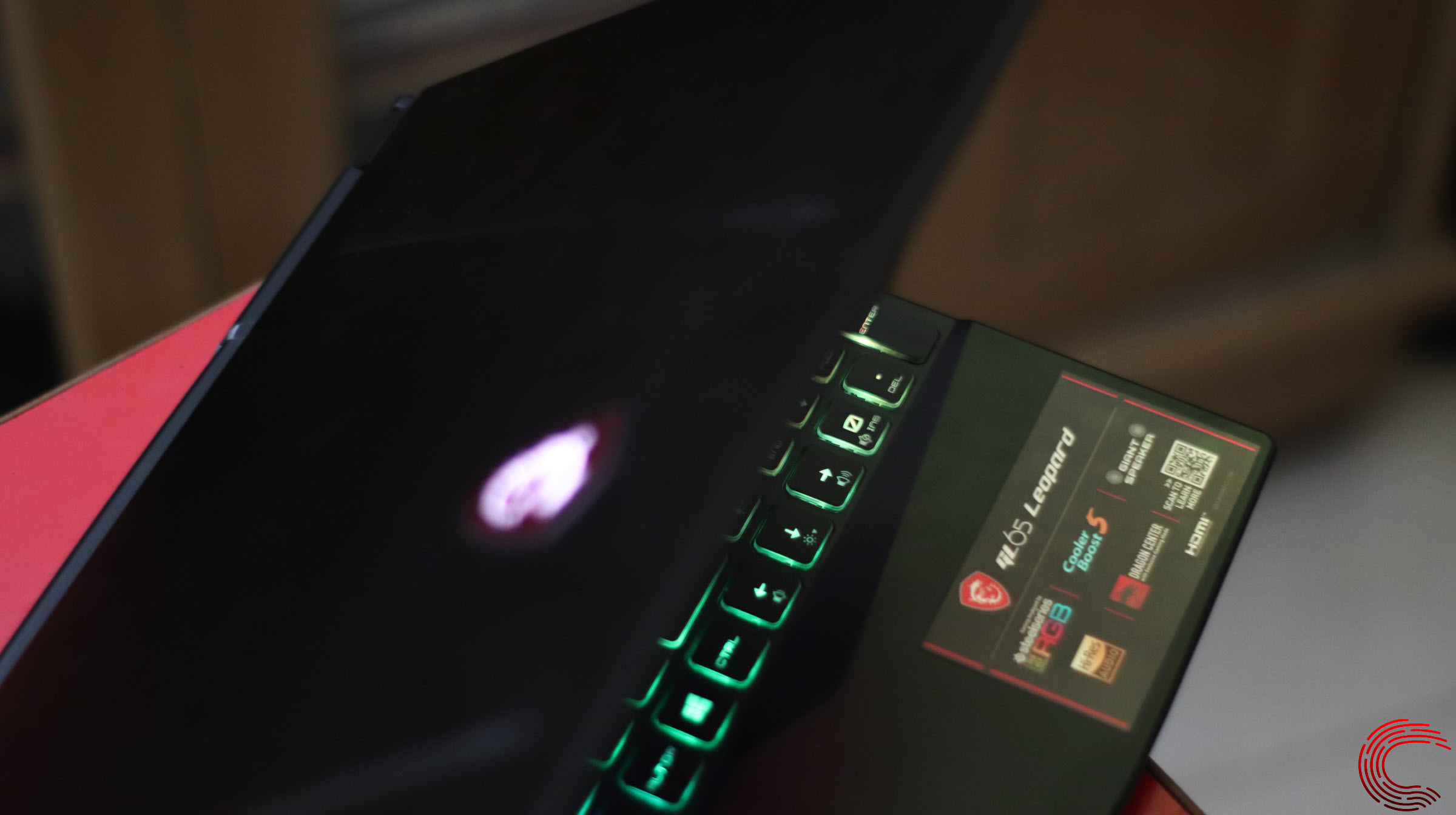 MSI make some of the best gaming laptops out there, and this trend continued through last year. The GL65 series are now succeeding the previously famous GL63 series by MSI.

The most notable upgrade here is in the chassis, with the GL65 being about 16% smaller than it’s predecessor. Rest everything, however, is just about the same.

While the MSI Stealth series takes care of thin and light gaming laptops, the GL series sacrifices a bit of thinness to pack in more gaming power. The series sits in the medium-budget category and packs in some pretty great hardware for the price. The initial launch was mid-2019, and there have been several models with various configurations since then.

In this article, we’re breaking down the MSI GL65 Leopard, going over each of its aspects and bringing you a detailed review to aid your decision.

You’ll find the most popular models on Flipkart or Amazon. However, you may have to use the MSI website or visit a store in your vicinity for higher-end configurations.

Here are the available models with their prices at the time of writing.

Also read: What is MSI Super Charger? Pros and Cons

The chassis is rather slim and light, with the 15-inch display in our model neatly packed between some pretty thin bezels. MSI also managed to pack in a pretty average 720p camera in the top bezel.

The display is a 15-inch (1080p) IPS LCD panel with good viewing angles and some amazing clarity. However, if you’re sitting at a distance from the laptop, you might find the display a bit lacking in sharpness. The 1080p resolution is just fine for gaming with the 1650Ti.

You can run up to two monitors at 4K simultaneously using the mini display port. Depending on your monitors, that could be all you need. Our model had a 60Hz panel. However, you can opt for a 120Hz panel as well.

The port situation on the MSI GL65 is also rather good. You get three USB 3.0 ports, one Type-C port, which isn’t thunderbolt, a full-size HDMI port, a display port, a memory card slot and two separate mic and headphone jacks. There’s also the good old Kensington lock slot as well.

The problem with these ports is that a few of them are located too close to each other, and they’re way too close to the front of the laptop. This can end up encroaching your mousepad’s space and can cause issues if you’re keeping your laptop in a tight space.

The keyboard is from SteelSeries and has a rather useful Numpad too. The typing experience is amazing, and there’s enough key travel and tactile feedback.

That said, the format is a little bit different from the usual laptop or external keyboards, with the Windows key being on the right only. Once again, you can swap it with the function key on the left using the SteelSeries Engine software, but even if you don’t want to, it’ll only take a little bit of getting used to the layout.

You get per-key RGB that can be configured in several ways using SteelSeries Engine 3. The software also packs a bunch of cool effects such as game-specific lighting and audio visualisers.

One big drawback about the keyboard is that it doesn’t have any dedicated media buttons. However, you can assign buttons to various system functions in the SteelSeries software. Once you do that, you’ll forget all about the missing media buttons.

Also read: How to change your MSI laptop’s keyboard colour?

You get a rather average trackpad, nothing too special. There is nothing else on the keyboard deck except the power switch, a keyboard profile switch and a fan boost switch.

There are no biometric scanners as well.

The speakers are located at the bottom of the laptop and are average at best, as is true for most MSI laptops. The Nahimic utility allows for some adjustability, but there’s only so much you can do using the software.

TheGL65 features MSI’s Cooler Booster 5 technology to keep its insides cool. This is a dual fan system, and the fans can get quite loud. Nearly half the laptop’s bottom is nothing but a mesh to let lots of air into the vents.

There’s a pretty quick 500GB M.2 SSD here as well, and the MSI logo on the back glows.

Overall, while the chassis can blend in with conventional laptops if you want it to, this laptop is a gaming laptop through and through.

Also read: How to control the fan speed on MSI?

The MSI GL65 comes preloaded with the latest version of Windows 10 Home 64-bit. You also get a bunch of not so useful MSI bloatware such as PowerDirector, Nahimic, Music Maker Jam and what not.

You will find a bunch of MSI utilities on the laptop when you first boot the machine. Not all of them are useful, to be honest.

Out of these, we only recommend keeping the MSI Dragon Center and the Nahimic app if you’re looking to tune your audio.

The GPU comes with standard Nvidia drivers, the Nvidia Control Panel and the GeForce Experience app. We recommend keeping them both as they both are equally useful in different situations.

There’s also the aforementioned SteelSeries Engine 3, which lets you control and configure your keyboard.

Also read: How to use MSI Afterburner to overclock GPU?

The performance on the MSI GL65 is pretty good considering its 9th Gen i5-9300-H and  4GB GTX 1650Ti. There’s 8GB of RAM, which is sufficient for just about everything you do with your laptop. However, if you’re looking to run extensive loads on the machine, we recommend upgrading to 16GB (and maybe even pick the i7 variant if your pocket allows).

We tried out games like FIFA 21, iRacing, Assetto Corsa, Apex Legends, DiRT Rally 2.0, Valorant and the good old CS:GO, and all of them ran on the highest settings in 1080p without a glitch. You can easily maintain 60FPS+ in most games as of now.

Since the display is 60Hz anyway, any more frames will only cause you problems. You’d be better off limiting your frame rate in games like FIFA 21, where the laptop can easily push way past 60FPS.

However, considering the power-hungry components and a beast of a cooling system, that’s all you can ask out of the 41 watt-hour battery. So we won’t complain. But don’t forget to carry the charger along. This is, after all, a gaming laptop, and battery life isn’t exactly the first preference here.

Another small quirk you’re going to have to keep in mind is the MSI Battery Master settings that you can change from the Dragon Center. Basically, MSI limits how much you can charge the battery to prolong battery life.

Charging your laptop in the wrong mode and then leaving behind the charger can be troublesome. We experienced it ourselves.

Also read: How to change skins in MSI Afterburner?

Should you buy it?

If you’re looking for a great laptop that can blend in with other environments just as well as blends in with your RGB Gamestation while providing some serious power, MSI GL65 is the pick for you.

The laptop can be as discreet or flashy as you want it to be and still power just about any software you need. There’s a good selection of ports and model availability to make everyone happy.

Even on a budget, the baseline model delivers excellent value and aesthetics compared to its rivals, making it extremely hard not to recommend the laptop.

While a i7 variant should be your first pick for the GL65, if you’re on a tight budget, the i5 variant is a value-for-money proposition.

You don’t quite get a lot in the box, just the laptop rolled in a sleeve, the charger, and some paperwork. The unboxing experience isn’t exactly super amazing but isn’t bad by any stretch of the imagination.

Here are a few benchmarks that we ran on the MSI GL 65 Leopard using Geekbench and Novabench.

Here are the Novabench benchmark results.

Here are a few pros and cons to help you make your decision.

Also read: How to fix ‘MSI camera not working’ issue?