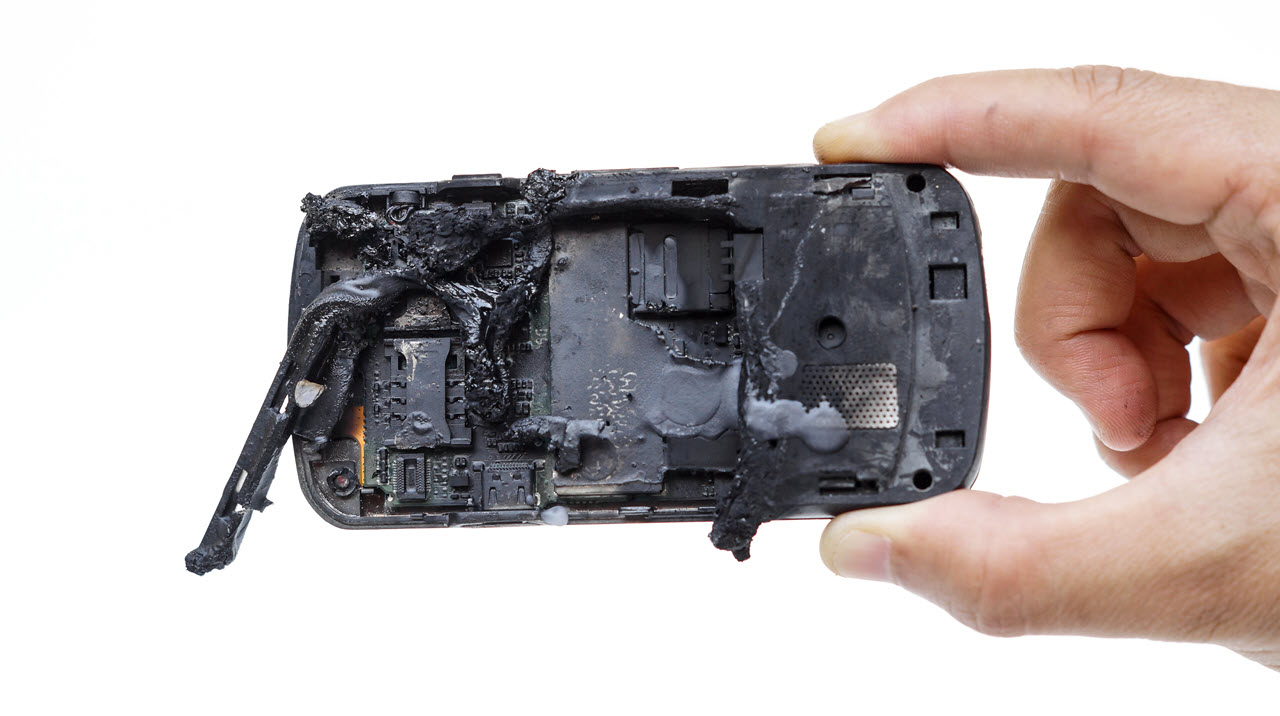 The word ‘explosion’ brings to mind mushroom clouds and action movies. Would you believe it if you were told that one could happen in your pocket? Smartphones. We all have them; we all use them — packed with potent chemicals separated by slim barriers.

A smartphone is an incomparable requisite with the potential to be lethal. Smartphone manufacturers put in place several fail-safe mechanisms to protect users. However, if even one safety feature fails, your phone can become a danger to yourself and everyone around you.

Bear in mind that cell phone explosions are few and far between. But when they do happen, they can be deadly.

To understand why phones explode, it is essential to know what’s inside a phone.

Components of a smartphone

Though you can figuratively hold the whole world in your hands, cell phones are relatively simple in structure. Every modern phone has a circuit board, a camera, sensors, a display, a microphone, a speaker, and a battery.

When discussing explosions, we are mainly concerned with cell phone batteries. Most modern smartphones use lithium-ion batteries. These batteries need to be carefully handled as they show explosive tendencies when overheated or incorrectly arranged.

Why are Lithium-ion batteries used?

In the early 1990s, Lithium-ion and Nickel-metal-hydride (NiMH) batteries were vicious competitors. However, Li-ion batteries came out on top to be the fastest-growing battery today.

Lithium-ion batteries do not suffer from the “memory effect” as NiMH batteries do. In essence, partially charged batteries slowly lose the ability to work at their full capacity. As a result, they can only provide as much power as has been gained in the previous charging. So, for example, if you plug in your phone to charge when 30% battery is remaining and unplug it at 70%, battery life will last only until you hit 30% again.

Li-ion batteries subvert this issue and work at maximum capacity regardless of the charge provided. Completely discharging a Li-ion battery could ruin it. Hence, they can handle hundreds of charge-discharge cycles.

Despite the occasional danger posed by Li-ion batteries, they are still the best and most viable alternative available in the market, justifying their relentless use.

Every battery has two electrodes (points at which electricity enter or exit the system). Anode has a negative charge, and cathode has a positive charge. If the electrodes touch, the current flows directly between them, causing their eventual degeneration. To avoid this, Li-ion batteries have a micro-perforated plastic sheet between them.

Lithium ions are present at the anode. When the battery discharges, the ions travel to the cathode. When plugged in, electricity provided to the cathode pushed the ions back to the anode. This flow of ions generates electric energy.

When this energy is released slowly, it can power any gadget for a stipulated amount of time. Similarly, the duration for which a phone needs to be plugged in to be fully charged is dictated by preprogrammed software. If plugged in for any longer, the device has fail-safes to avoid absorbing more charge.

As a highly reactive metal, Lithium undergoes exothermic reactions. That is, a massive amount of heat is generated. The disruption of this highly controlled internal mechanism causes explosions.

Why do smartphones explode?

There are several reasons that can cause a smartphone battery to explode, including overheating, short circuit and faulty third-party accessories, primarily chargers.

Electrolytes are liquids present between the electrodes. They facilitate the shuttling of Lithium ions from anode to cathode and vice-versa. When overheated, the electrolyte turns into a flammable gas, which expands and catches fire, causing an explosion. Overheating can happen either by leaving the phone plugged in for too long or exposing it to an external heat source. In addition, poorly insulated chargers from subpar companies may generate heat close to the battery.

Thermal Runaway is a phenomenon in which the rate of heat generated or absorbed exceeds the rate of heat expelled. This causes a gradual build-up of heat within the system. The additional heat in the system stimulates further increase in temperature, forming an uncontrolled positive feedback loop. This is of high risk in devices like laptops which have two or more Li-ion batteries. The explosion that subsequently occurs is extremely dangerous. The only way to prevent thermal runaway is regular preventive maintenance.

Piercing the battery pack either intentionally or unknowingly can have severe consequences. The anode and cathode come into contact, causing overheating of the system.

This was the case with Samsung Galaxy Note 7 phones in late 2016. Due to manufacturing defects, the electrodes connected over a period of use, causing a few smartphones to explode. As a result, Samsung recalled all the Note 7 phones and implemented a thorough system of testing.

If a metallic object pierces the battery pack, lithium gets deposited on it and forms needle-like structures called dendrites. Once sufficiently large, the dendrites can internally short out the battery.

Explosions victims often report using substandard chargers or batteries to save costs. Unfortunately, these products are often not tested for safety and quality and are hence ill-advised.

Smartphone explosions, as mentioned above, are sporadic. However, it is prudent to take a few preventive measures to protect oneself.

Don’t leave your phone in places that are exposed to sunlight, such as your dashboard. Continuous exposure can cause overheating and trigger a thermal runaway. It is better to remove phone cases while charging to facilitate the dissipation of heat better.

Unplug your phone as soon as it is done charging. Try not to leave it to charge overnight. Instead, use the right kind of charger. Unrequited power surges are hence avoided.

Avoid applying pressure on the phone as it is not built to undergo much strain. Keep sharp objects of any sort away from the battery pack.

Even if you don’t follow any of these guidelines, you still have some protection measures as each product is tested before being released into the market. Furthermore, the government has Consumer Protection Laws that help ensure the safety of customers.