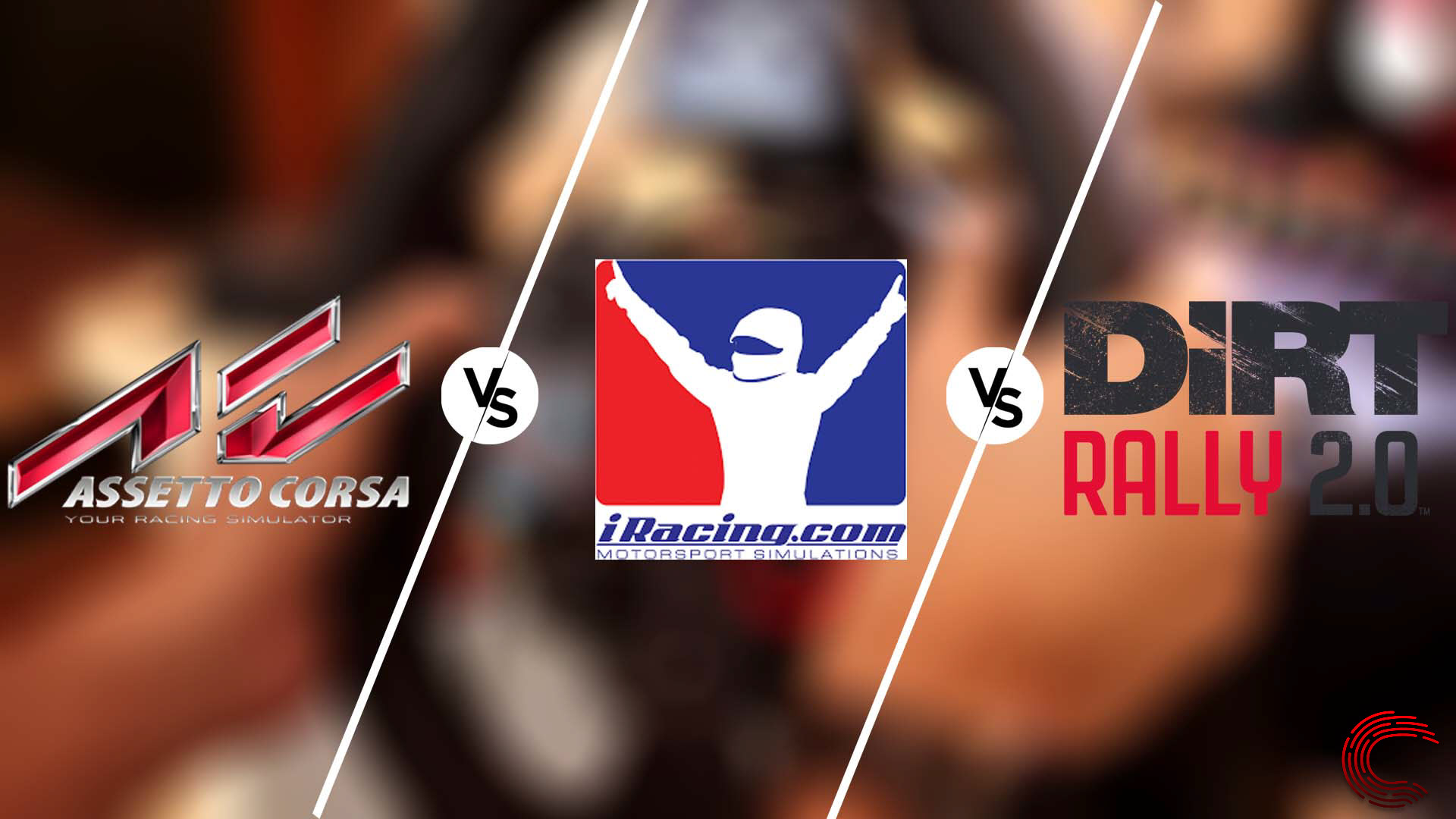 Racing sims are all the rage these days and for a good reason. The thrill of motorsport from the comfort of your desk is the closest a lot of us; myself included, can get to real-life motorsport.

Now regardless you’re an F1 junkie or a rally freak, there’s a sim out there. In this article, we’re going to put some of the most famous racing sims right now — iRacing, Assetto Corsa and Dirt Rally 2.0 head to head so you can figure out which one you’d want to pick up.

We’ll be comparing these sims over things such as how easy they are to complete beginners, the content and variety they offer, and how much they cost to play.

Also read: What is iRacing? Should you prefer it over other sims?

If you’re a complete beginner to the world of Sim Racing, Assetto Corsa is a good place to start.

You can get the Content Manager, a popular utility for managing the sim, browsing servers or hopping in a local session. It also makes adding content to the sim extremely easy. All your settings and control configurations are also right where you’d expect them. Super easy for beginners.

Dirt Rally is also pretty straightforward. All you do is download the game, fire it up, and you’re pretty much in the mix. There are tons of tutorials and help online if you need to figure out how to drive 1000hp beats with zero traction

iRacing is a whole another story. It’s realistic, yes, but it’s also incredibly complex. There are leagues and divisions and different license classes and things like iRating and Safety Rating that you need to keep in mind every time you go out on the track.

The sim is highly complicated for total beginners to start with and punishes every mistake you make out there, even if it’s just slightly clipping the grass.

iRacing is the absolute winner here, no questions asked.

You can race just about anything in this game. There’s a selection of over 100 tracks available in 350+ configurations. iRacing has more laser scanned tracks than any other sim, including some of the most legendary tracks out there like the Laguna Seca or LeMans.

There’s also a massive collection of 100+ cars to choose from, the likes of Road Cars, Open-Wheelers, Prototypes, off-road, Nascar and what not.

iRacing also has a bunch of third party utilities that you can use. Some of the more famous ones include Trading Paints, which you can use to get free custom paint jobs for your cards, crew uniforms and helmet designs. There’s also CrewChief if you want to use a different radio spotter.

Assetto Corsa is a close second here. While the game by itself doesn’t have anything out of the ordinary to offer, the modding community around this sim is impressive.

You can get just about any track or car in the world on the internet, download it and use it in the sim. If that’s not enough for you, you can build your cars and tracks and race them in here.

The game also has a lot of DLCs on offer that adds more cars without burning a giant hole in your pocket. You can race an exquisite selection of 178 roads and track cars. However, if offroad is more your thing, you might want to look at the next entry.

Dirt Rally 2.0 is exactly what it sounds like, a fantastic Rally Game that will leave you with goosebumps on your arms after the first stage. The cards, tracks, crashes and just about everything else is as real as it gets behind a screen.

There’s a pretty decent selection of 6 real-world Rally locations, around 50 of the world’s best rally cars and eight rallycross tracks to get your offroad fix.

To enjoy any sim entirely, you’re going to need a good enough computer and a steering wheel setup. While you might get away with a weaker PC, we strongly suggest investing in a wheel like the G29 from Logitech to make sure you make the most out of these sims. You can also go ahead and invest in a VR headset to get even more immersion.

In terms of price, Assetto Corsa and Dirt Rally are both one-time purchases coming in at around $7 and $12, respectively. You can buy additional content in the form of DLCs later on if you please, and even those aren’t very expensive.

iRacing once again breaks the stereotypes here. It’s a subscription service instead of a simple one time purchase. You have to buy a monthly, half-yearly or annual subscription which comes for $6.50, $16.50 and $55.50, respectively. If you’re committed, you can go ahead and buy a two-year subscription for $99.50 as well.

If you get your maths right, that’s quite the investment. iRacing is meant for serious players only, at least for the higher-level leagues, where you’d have to buy most content. So yes, you can start with just the membership and nothing else, but eventually, you’re going to have to invest more.

So if you’re starting with Sim racing and want to race on tracks, we’d suggest going with Assetto Corsa and getting to grips with racing first. Then if you’re looking for more, you can always upgrade to iRacing. You won’t regret it.

However, if you want your bit of the offroad fix, Dirt Rally is pretty much the game to play. You can also try the offroad content provided by iRacing, but Dirt rally is much better at immersion and physics.