Downloading a new game every time you wish to play can be a tedious job. There’s always the waiting part. Then you have to manage disk space, take care of the system requirements and so on.

Due to these reasons, browser-based games have been on the rise for the past couple of years. In this article, we bring you the top 15 browser games you can play on your PC right now.

Contract Wars is an online First-Person Shooter game. The game is heavily based on mechanics from CounterStrike and Call of Duty.

There’s a wide variety of guns available that you can slot in up to five armoury slots. There a skill progression system in place too. On the Graphics side of things, the game looks awesome and has realistic control mechanisms. There’s even directional sound.

There’s a good variety of maps and game modes available. The player base is also pretty good. It’s also available as a downloadable client.

You can play Contract Wars here.

ShadowGun: DeadZone is a really fun third-person shooter game on Facebook. It has exciting visuals and a good progression system that makes new players feel right at home.

There’ a lot of customisation options in the game to chose from. There a bunch of maps and game modes too.

The game features balanced shooting mechanics that make it fun and realistic at the same time. There’s a gentle learning curve, so you should be able to get good at the game reasonably quickly.

The game is also available on the Google PlayStore.

You can play ShadowGun: Deadzone here

The progression system is also really well balanced and makes the game really fun to play. There’s good variety in the types of missions you play, which makes the game feel less repetitive. There’s also an option to play co-op with your friends.

The game is also available on Android and iOS.

You can play Dead Trigger 2 here

Superhot is an interesting take on the first person shooter genre. In this game, time only moves when you do. This makes for really challenging and addictive gameplay.

The levels require more than just first person shooting skills. You need to be able to think quickly despite time being frozen, or you’re dead. The game has beautiful bold colour visuals that add to the overall feel of the game.

Super hot is also available as a download on Steam.

You can play Superhot here.

Agar.io is a very simple massively multiplayer game. The game’s objective is to gain the maximum area on a petri dish. Players control one or more cells and fight with other players to capture their areas.

The game has received positive reviews from critics for its simplicity, competition and mechanics.

You can play Agar.io here

Fun fact: The name Agar.io comes from a substance called Agar, which is used to cultivate bacteria on a petri dish.

Slither.io is in many ways, the modern world snake. The game mechanics are the same as the retro classic. The players control a character that resembles a worm. The objective is to consume pellets spawned by the server, eventually becoming the largest worm on the server.

The game is also available on Android and iOS.

You can play Slither.io here

RuneScape, also known by some as RuneScape 3 is a massively multiplayer MMORPG game. This is justified by the fact that this game has been recognised by the Guinness World Records as the world’s largest and most-updated free MMORPG.

RuneScape takes place in the world of Gielinor, a medieval fantasy realm divided into different areas, namely kingdoms, cities and so on. Each region has a variety of monsters, resources, and quests to challenge players.

There are also a bunch of customisations options available for the player avatars. Overall, an entertaining and addictive game to play.

You can play RuneScape here

Canabalt is a side-scrolling endless running game. Much like the Android game Vector. The player controls an unknown character running away from an unknown threat.

You just run, jumping over obstacles and building with movements derived from the running sports Parkour. This game has been credited with popularising the endless runner subgenre. It is available on Steam, Android and iOS too.

You can play Canabalt here.

Dead Frontier is a massively multiplayer shooting game based in a post-apocalyptic zombie world. It features co-op gameplay, with an interesting storyline and a well-baked progression system. There are tons of customisation options available, and the graphics are decent.

You can play Dead Frontier here

The primary goal of the game is to destroy your opponent with all the skills and abilities that the game provides to you while taking as less damage as possible. Prismata follows a simple two player turn-based strategic gameplay pattern.

You can play Prismata here 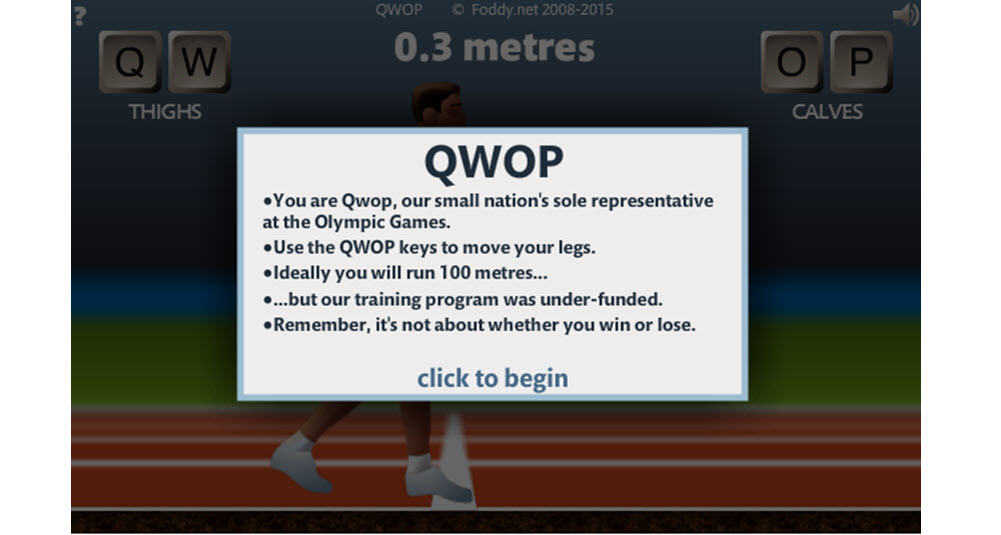 QWOP is a ragdoll game. Players control an athlete named QWOP by using, you guessed it, only the Q, W, O and P keys.

The game is extremely fun to play and can be quite addictive. The ragdoll physics in the game make it a whole new experience.

This game has also been a pretty big internet meme after its outbreak in December 2010.

You can play QWOP here.

A Dark Room is an open source role play game. It is completely text-based as well. The game starts with the player in a dark room where they can only light and tend to a fire.

As the game progresses, the player gains more abilities such as interacting with more objects, strangers, creating buildings and eventually starting a village. The types and quantity of exploration increases too. The game is extremely intriguing to play.

You can play A Dark Room here.

Another game along the lines of the retro classic Snake, flow (stylised as flOw) adds an interesting twist.The game begins immediately; there are no menus or such.

The player controls a multi-segmented worm-like creature. The objective is to become the longer worm on the server while destroying other worms.

flOw adds interesting items here and there to make the game interesting and anti-repetitive. The visuals are also really artistic.

It’s also available on the PlayStation.

You can play flOw here

FreeRider HD is a platform based racing game. What’s interesting here is that the players create their own levels. Each level has a bunch of obstacles that the player has to get over. They have to draw their own track to race across those objects and reach the finish line.

Free Rider is also available on Android and iOS.

DarkOrbit is an online browser-based massively multiplayer isometric flash game. The player controls a spaceship in outer space. The goal is to win huge battles with other non-player characters and other human opponents.

The game has a good variety of weapons, skills and abilities to choose from. The visuals are also pretty good.

You can play DarkOrbit here.

So there you have it, 15 great browser games for you to enjoy on your PC.