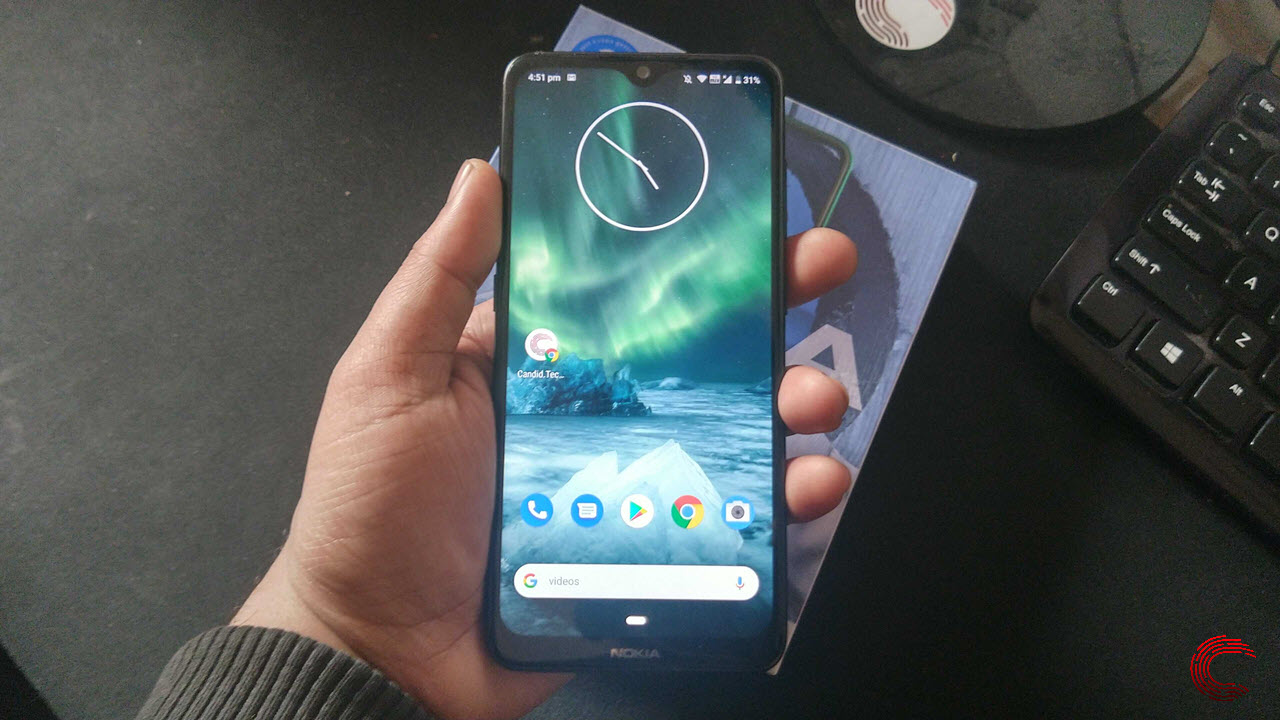 Android One-powered Nokia 7.2 was launched in September 2019 alongside the cheaper Nokia 6.2 and retailed at a starting price of INR 15,999 at the time of launch. The phone promises a great user experience and long-lasting battery life, courtesy of the clutter-free UI.

While Nokia clearly lags behind devices offered most of its competitors like Vivo, Oppo and Xiaomi in terms of processor and memory at the same price point. Still, its saving grace is the Android One moniker, which promises significant OS updates for two years and security updates for three. Although this might not translate to instant performance enhancements, it’ll ensure the phone’s durability with consistent bug fixes and optimisations as well as that it doesn’t fall prey to any threats in the future.

The promise for future updates alongside Nokia’s efficiency in delivering quick updates soon after Google releases them will be one of the major reasons for you to buy the phone.

We’ve had the phone for a little over a month and here is our long-term, in-depth review of Nokia 7.2 that will be useful for you to decide whether or not the phone meets your needs.

Nokia 7.2 is available in brick and mortar stores as well as various eCommerce platforms such as Amazon and Flipkart, among others. It will cost you around INR 15,700 for the 4GB variant and INR 16,739 for the 6GB variant

When it comes to hardware, Nokia 7.2 packs some exciting features. 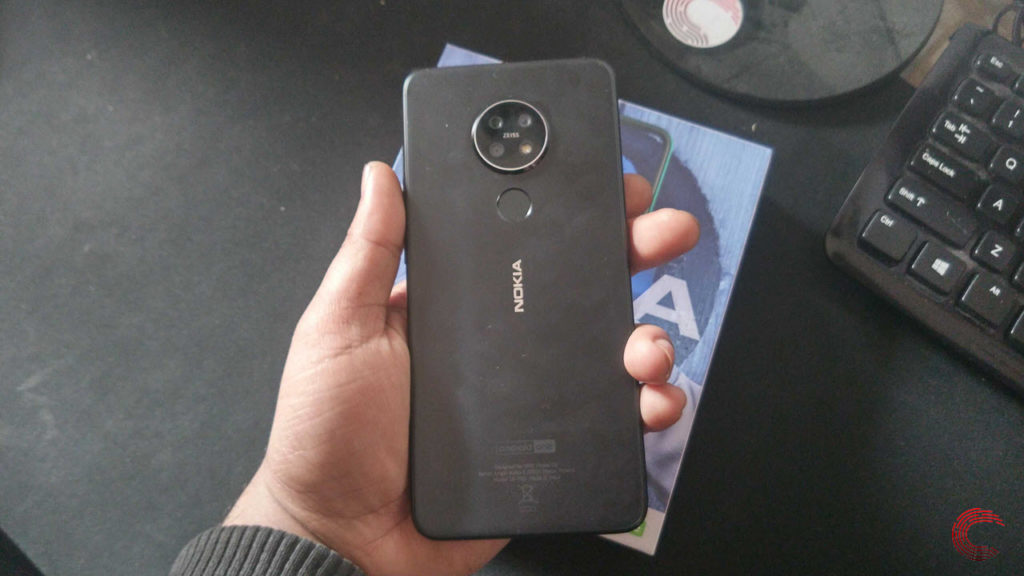 The Nokia 7.2 comes with a sleek design with a teardrop notch at the front and a matt finish at the back. Although the back isn’t shiny like the other models, it looks cool, and if you’re going to add a back case to the device, it actually doesn’t matter. However, it’s prone to fingerprints and smudges quite quickly.

What really makes the back design standout is the round camera cutout, which, according to many is also the highlight of the overall design. The triple camera setup is packed with a circular shape that is slightly bulging — reminiscent of the earlier Lumia models like 1080 and 830.

If Google Assistant button is ignored, the overall design of the Nokia 7.2 is sleek, refreshing and feels comfortable to operate with a single hand. 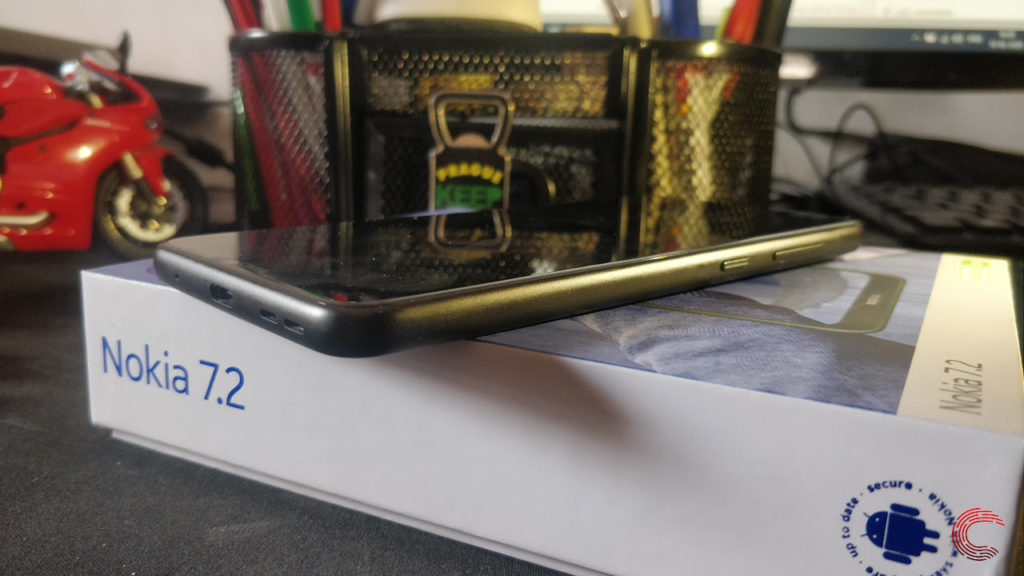 Nokia 7.2 features a USB Type-C port at the bottom that can be used for charging and data transfers as well as a 3.5mm headphone jack at the top, which surprisingly has become a thing we talk about as smartphone manufacturers have started phasing out the good old audio jack in most of their higher-ranged devices.

The device has the volume, and lock buttons tucked up on the right panel with the left panel housing the SIM tray, which also includes the microSD card slot and the dedicated Google Assistant button which is a bit of an eyesore.

One of the major flaws (and complaint) that we felt had is with the placement of the Google Assistant button, which is inadvertently pressed at times when you’re trying to control the volume, playing games or even while using the camera in landscape mode.

While this isn’t a big qualm, it becomes significant as there is no direct way to remap the Google Assistant button and it’s not often that you’ll be using the button. Even if you use the Assistant often, we bet that you use the ‘Ok, Google’ voice command to activate the smart assistant or long-press your home button.

If you really want to remap the button, you can use third-party apps such as Bixby Button Remapper — popular among Samsung Galaxy phone users.

The mid-segment Nokia 7.2 have downward-facing speaker grille, which is efficient enough — not too loud but gets the work done and the sound doesn’t lose its quality in higher volumes as much as other devices in the same price range.

The fingerprint sensor is located at the back just below the camera. It didn’t lag when we tried, and you won’t feel the difference from any other device claiming to have a super-fast fingerprint sensor. It’s also comfortable to reach.

The triple-lens camera setup on the Nokia 7.2 sports Zeiss lens. The primary 48 MP camera is up to the mark and rivals its competitors in all respects — provides fine pixel density and colours. However, the 5MP depth sensor is not as accurate but gets the work done, which is fine considering the price point. The phone also gets an 8MP wide-angle lens which helps in getting more in the viewfinder.

Like many other smartphones these days, Nokia 7.2 offers a Portrait mode for clicking images with a bokeh effect, in addition to the standard photography mode. While the phone’s standard photos look really well composed, the portrait images don’t come out as well as the background blur is often uneven and lapses on the subject in focus. This can be a software issue, which might be fixed in future updates, but currently, the depth sensor of triple-lens setup on the Nokia 7.2 lags.

Here are the software details of Nokia 7.2.

Nokia 7.2 comes with Android 9 out-of-the-box. As Nokia is part of Android One program and thus you will get minimum apps and clutter-free experience.

While we expected to get the Android 10 update — rolled out to some of the Moto phones — by January at least, considering Nokia has always been quick with security updates in the previous devices used by us ever since they re-entered the market with Android devices. But the company has still not given an exact date as to when the latest OS update will be released for the device, except you can expect it within the first half of 2020 — a little disappointing but still assuring.

Notification Shelf contains nothing out of the ordinary with few new settings such as PureDisplay (Nokia exclusive) and Inverted colours.

The Portrait and Pro mode feature additional settings like Zeiss Modern, Zeiss Swirl, Zeiss Smooth, Classic, Star and Heart that enable software-based customisations when clicking images. The wide-angle lens can be used in standard videos as well as while shooting in timelapse or 1:1 modes.

As mentioned before, the portrait mode does disappoint a bit, and so does the night mode, which returns grainy images most of the times.

Nokia 7.2 is powered by Snapdragon 660 processor, which is more than enough for regular use. But considering the price, the processor seems a bit out of place.

This is where Nokia 7.2 lags behind its competitors like Xiaomi and Vivo, which pack better-performing processors in their devices offered at a similar price range. 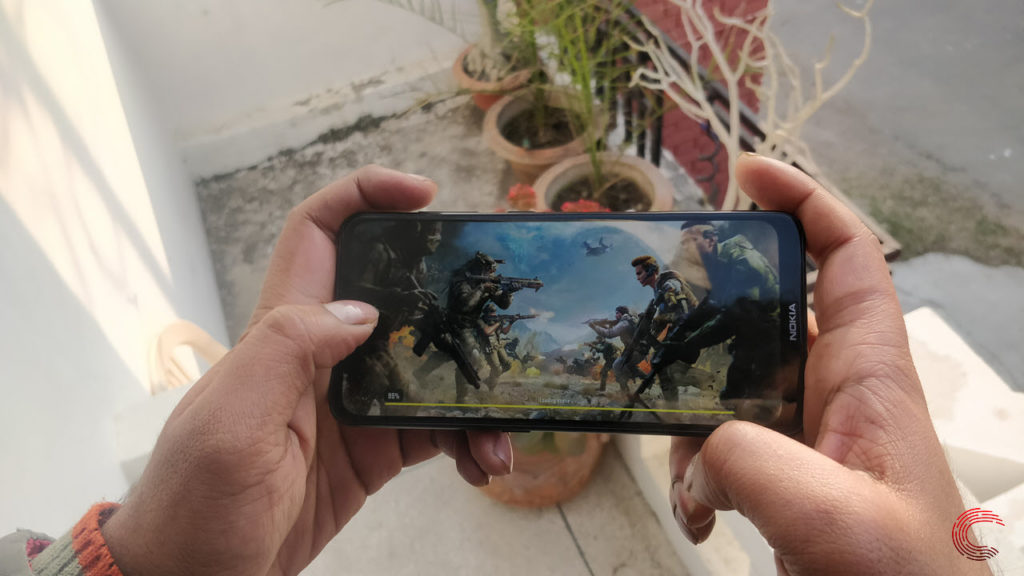 The device that we are reviewing has 4GB RAM and is appropriate for gaming as well as usually surfing and streaming. You can also buy a 6GB variant for better performance, which will ensure that your device doesn’t lag even during intense multitasking. We saw no significant lags while drilling the device.

Also, there are no significant heating issues that we encountered even after a few hours of playing games like PubG and Call of Duty and streaming videos on Netflix, Prime Videos and YouTube.

Although the device shows no significant delays as such given the decent processor and minimal UI, it did stutter for a fraction of a second while playing PubG on the medium setting — nothing that hampered the gaming experience though. We felt no lag while playing Call of Duty: Mobile either. In short, the phone is quite capable of handling medium to low graphics games with ease. 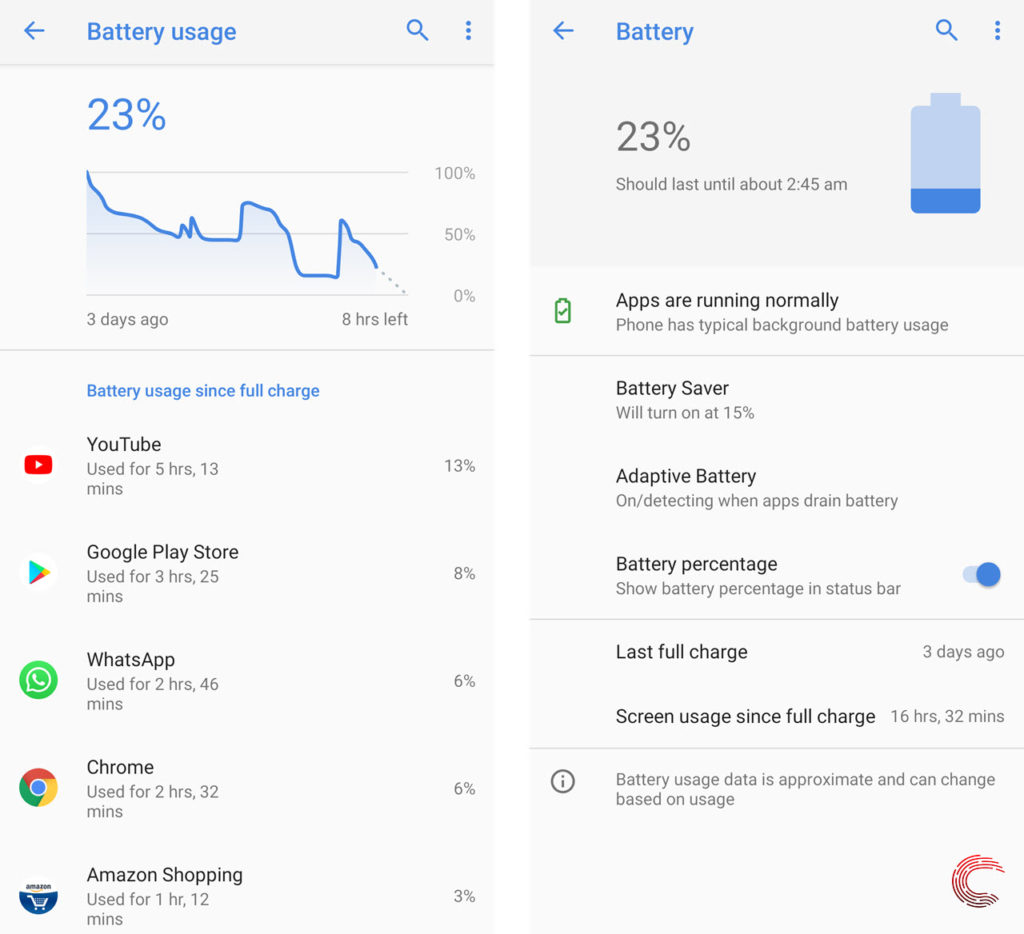 Nokia 7.2 comes with a decent 3500 mAh battery that lasts for about a day on normal use, which is a bit low considering the standards set by the likes of Motorola One Power (5000mAh) and Samsung M30s (6000mAh) in the mid-budget segment. If you are a binge-watcher or a heavy gamer, you will need to charge the device more than once in a day. 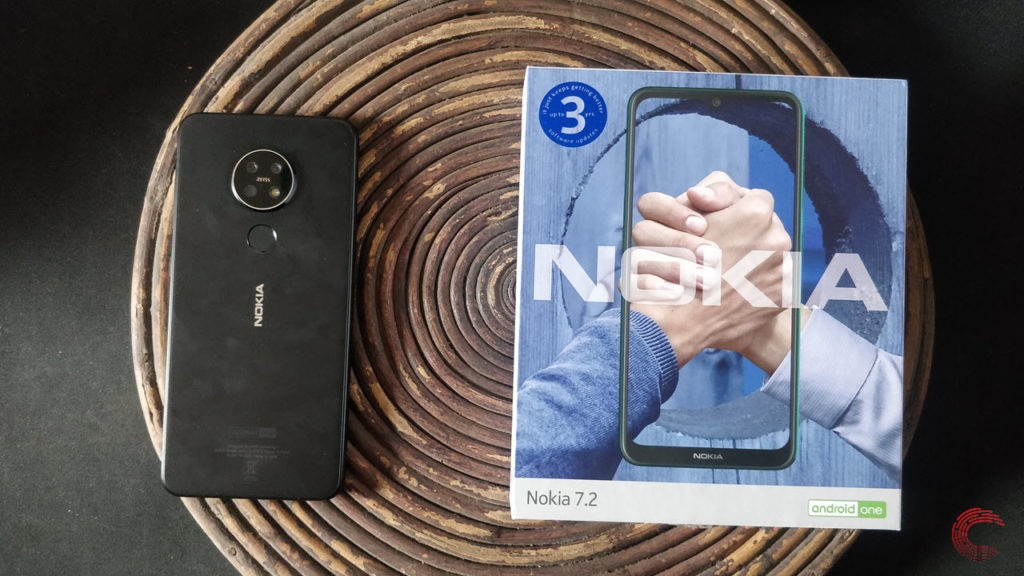 Should you buy it?

Nokia 7.2, among other Android One offerings, is more appealing if you’re an Android purist and love the clutter-free experience of stock Android. As far as the hardware specs go, other phones in the market offer better at a similar price point but if you’re stuck with a 15-16K budget and wish to get a stock Android device that performs well, look no further and get yourself the Nokia 7.2 today.

Also read: How to turn your phone’s flashlight on and off?